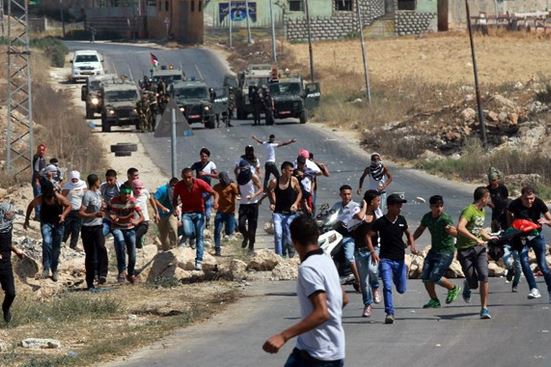 The soldiers cuffed and blindfolded the woman, and took her to the Etzion military and security base.

In addition, the soldiers invaded Kharsa nearby village, and clashed with dozens of local youths causing several injuries.

On Monday afternoon, clashes took place in different Palestinian communities, in Hebron, after the soldiers invaded them.

Mohammad Awad, spokesperson of the Popular Committee against the Wall and Settlements in Beit Ummar town, north of Hebron, said three teenagers were shot in the town, and that more clashes took place in the southern area of Hebron city, the Halhoul Bridge area, and the al-Hawouz area.

Awad stated that one of the wounded teens was shot with a live round in his left leg, and was moved to the Hebron Governmental Hospital.

The army also fired dozens of rubber-coated steel bullets and gas bombs on schoolchildren who marched protesting the ongoing Israeli violations against the Al-Aqsa Mosque in occupied Jerusalem.

Earlier on Monday, soldiers kidnapped four Palestinians in different communities in of Hebron, after the army broke into and searched several homes, and a bakery.

On Monday at dawn, the army invaded the al-‘Isawiyya and Silwan towns, and at-Tour neighborhood, in occupied East Jerusalem, kidnapped 27 Palestinians, including 11 children, and demolished one home in Silwan.