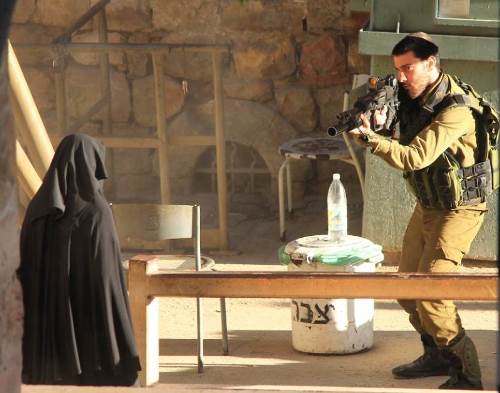 Hadeel Hashlamoun, 18, was critically injured and later died of her wounds on Tuesday afternoon, when soldiers shot her at an Israeli military checkpoint in Al Shohada Street in Hebron old city. Media sources in Hebron said Hadeel was injury in her abdomen, and that the soldiers left her bleeding onto the ground for nearly 30 minutes, and prevented Palestinian medics from approach her.

The Israeli army claims the young woman attempted to stab a soldier. A Photo by the Palestine News Agency – WAFA shows Hadeel just before being shoot by the Israeli soldiers with nothing in her hands.

The Israeli military initially said the woman was shot in her legs, and later said she is in a critical condition.

she was moved to Shaare Zedek Medical Center in Jerusalem where she died of her wounds. According to her family Hadeel was a first-year student at the Hebron University.

The Palestinian government issued a statement on Tuesday condemning the killing of Hadeel and demanded and international and independent investigation into the incident.