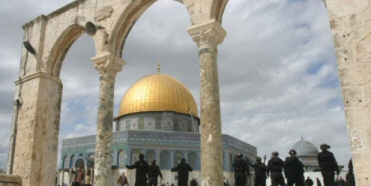 According to WAFA correspondence, settlers reportedly attempted to perform Talmudic (Jewish) prayers, however their attempts were foiled by the Mosque guards.

This came as Israeli police deployed large reinforcements across Jerusalem ahead of Jewish feast and shut if off from the West Bank, making the city a military barrack.

Police closed military checkpoints surrounding the city, set up barricades across the city to facilitate Jewish settlers’ access into the Mosque compound and restricted Palestinians’ access to the Mosque via Hatta, al-Silsila and An-Nather Gates.

Hundreds of Palestinian worshipers, mostly under the age of 40, were forced to pray in the streets and alleyways of the Old City after they were denied entry into the Mosque compound to mark the Islamic feast of Eid al-Adha.

Police have reportedly flown a helicopter and a surveillance blimp over the Old City of Jerusalem.

This came two days after Israeli authorities announced that it would completely close off the West Bank and Gaza from Tuesday 12:00 until dawn on Thursday.

According to a 1967 agreement Israeli authorities made after occupying Jerusalem, only Muslims are allowed in Al-Aqsa Mosque compound, while Jewish prayer is allowed at the Western Wall, said the PLO’s department of culture and information.

However, in recent months right-wing Jewish groups, who have previously called for the destruction of the Mosque and the construction of a Jewish temple on the site, have repeatedly raided the compound under heavy police escort, while severe restrictions are imposed on Palestinians’ entry.

The visits, combined with proposals for a Knesset vote to divide the site between Jews and Muslims, have outraged the Palestinian public, which sees the encroachment on Al-Aqsa as symptomatic of the wider denial of their rights in historic Palestine as well as intense discrimination in housing, employment, and social services by Israeli authorities.

The compound, which sits just above the Western Wall plaza, houses both the Dome of the Rock and Al-Aqsa mosque and is the third holiest site in Islam.

It is also venerated as Judaism’s most holy place as it sits where Jews believe the First and Second Temples once stood: the Second Temple was destroyed by the Romans in 70 AD.