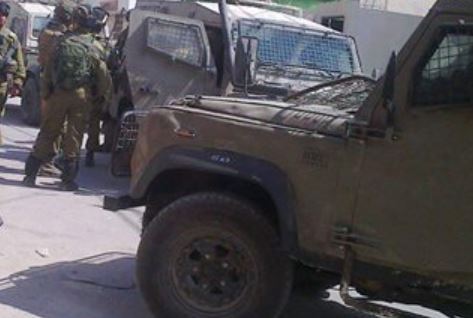 Palestinian medical sources have reported, on Friday evening, that three Palestinians were injured by live Israeli army fire in Teqoua’ town, east of Bethlehem, while many residents suffered the effects of tear gas inhalation. The army also attacked, and wounded, two journalists near the northern West Bank city of Nablus.Head of the Teqoua’ Local Council, Taiseer Abu Mfarreh, told the WAFA News agency that three young men were shot in their thighs, during clashes that took place with the soldiers after the several Israeli military vehicles invaded Khalil al-Wazeer area, in the center of the town.

Abu Mfarreh added that dozens of Palestinians, including children, suffered the effects of tear gas inhalation.

The soldiers also stopped Palestinian ambulances and medics while trying to enter the town, occupied rooftops of many homes after searching them, and used them as monitoring posts.

In related news, soldiers attacked two journalists, working for the French Press Agency, wounding one of them, and broke their cameras and equipment.

The attack took place during clashed between the soldiers and dozens of local youths after the army invaded Beit Forik town, east of the northern West Bank city of Nablus.

Cameraman Abbas al-Momani said that, as he and his team reached the main entrance of Beit Forik, the soldiers assaulted them, and smashed their equipment.

He added that the soldiers also attacked, and injured, a foreign journalist; medics moved him to the Rafidia Hospital in Nablus.