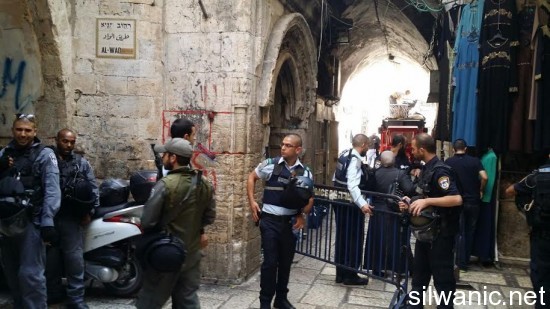 The three have been identified Mohammad ‘Ebada Najeeb, his brother Laith, and Rami al-Fakhouri.

In addition, soldiers continued to block all gates leading to the Al-Aqsa Mosque, attacked many Muslim worshipers before kidnapping three women, and wounded several Palestinians.

Abu ‘Asab said ‘Aida Saidawi was taken prisoner in the Suq al-Qattanin area, Najwa Mteir near the Council Gate, and Seena Sheikha near the Chain Gate.

The Wadi Hilweh Information Center in Silwan (Silwanic) has reported that nearly 150 Israeli extremists stormed the Al-Aqsa Mosque, through that al-Magharba Gate, under heavy army accompaniment, and that the soldiers closed most of the Al-Aqsa Mosque Gates, except for Bab Hatta, The Council Gate and The Chain Gate.

The army also installed iron barriers on the open gates of the mosque, and prevented all men and women, who are below the age of 50, from entering it, for the third consecutive day.

Silwanic said that Israeli extremists sprayed pepper spray in the faces of many Palestinians, causing several injuries, while the soldiers chased dozens of residents in an attempt to force them to leave the area.

Dozens of worshipers held dawn prayers near the Gates of the Al-Aqsa Mosque, due to Israeli restrictions preventing them from entering it.

In related news, soldiers detained a young Palestinian man, identified as Jihad Bodeir, and handed him a warrant preventing him from entering the Al-Aqsa Mosque and its courtyards for fifteen days.