Priests Call on Abbas to Address Cremisan Issue at UN 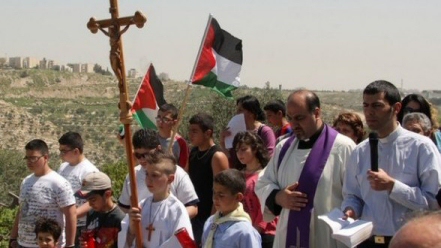 The CCIA of the World Council of Churches would like to express its deep concern on the building of the Israeli annexation and separation wall in the Cremisan valley, near Bethlehem, in occupied Palestine.

As a priest of the Latin Patriarchate in Jerusalem, and having been myself following the Cremisan case for many years, I’m here to alert the international community to the latest developments in the Cremisan area in Beit Jala, upper Bethlehem, which we consider almost as the last nail in Bethlehem’s coffin, condemning Palestinian Christians to being out of place in their own country.

In the last 6 weeks, Israeli forces have been uprooting hundreds of olive trees in the area, one of the last green areas in Bethlehem, very crucial for the survival of thousands of people. I call on you to remember the situation of Christians in Palestine, the birthplace of Christianity. Are you going to allow Bethlehem to die?

Mr. President, Israel is attempting to change the Palestinian identity of our occupied country. So far, the international community has failed to take any concrete actions to stop this and, furthermore, the countries that consider Israel as a “Jewish State”, are complicit in fuelling extremism; the most recent example is the silence of the international community on Israel’s continued attacks against religious sites, in particular the Al-Aqsa Mosque Compound in Occupied East Jerusalem. What we need in our region are democratic states with equal rights for all their citizens and not exclusive Jewish or Muslim states.

I call upon all of you to take meaningful action in order to stop the Israeli strangulation of Bethlehem. The Wall in Cremisan must be stopped. But most importantly, a just and lasting peace must be achieved by respecting the rules and principles of international law.

Therefore, Mr. President, we call upon:

1. The Government of Israel:

a. to immediately stop building the Wall in Cremisan.

b. to dismantle the sections already constructed on all occupied territory as recommended by the ICJ; and

2. The Human Rights Council and the international community to take effective measures to make sure the government of Israel is held accountable for the grave violations of international law, including forced displacement of population.