Abbas: “We Cannot Remain Committed To Peace Accords While Israel Continues To Violate Them” 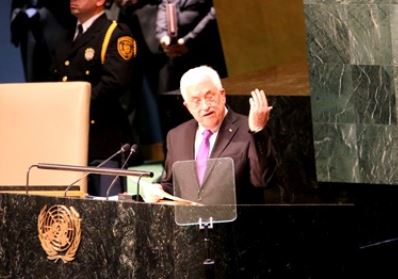 In his Wednesday speech at the United Nations General Assembly in New York, Palestinian President Mahmoud Abbas said the Palestinian Authority cannot remain committed to peace accords signed with Israel as long as the Israeli government continues to violate the agreements and continues escalating attacks against the Palestinians.Abbas stated that Israel insists on violating all signed peace agreements by refusing to stop its illegal construction and expansion of its colonies, in direct violation of International Law, in addition to refusing to release the Palestinian detainees, and refusing to end its daily invasions and assaults.

“The current situation cannot continue as it is. Israel must abide by International Law, and implement its responsibilities,” Abbas said, “We are a Palestinian Authority that is supposed to lead our people to independence and liberty.”

The president added that those who claim to seek a two-state solution must recognize the two states, and not just one.

“We cannot continue to waste time in endless negotiations, what is required now is a global umbrella that supervises ending this occupation, in accordance with all international resolutions,” he said, “We demand international protection for the Palestinian people as stated by International Humanitarian law.”

Abbas also called on the Israeli government to stop its illegal excessive use of force, and to stop its violations against Islamic and Christian holy sites, especially the Al-Aqsa Mosque, as such violations would transform the conflict from political to religious, which will lead the area into an endlessly escalating, explosive situation.”

The Palestinian president further stated that Israel continuously expands its military escalation and excessive use of force, in addition to resuming its illegal construction and expansion of Jewish colonies in occupied East Jerusalem and the West Bank, and continuing its siege on Gaza.

Contrary to what various media outlets claimed about Abbas ending the Palestinian commitment to the Oslo accords, and voiding them, Abbas said:

“We, therefore, declare that we continue to be bound by these agreements and that Israel must assume all of its responsibilities as an occupying Power, because the status quo cannot continue and the decisions of the Palestinian Central Council last March are specific and binding.’

In addition, Abbas welcomed the European efforts to reach a comprehensive settlement to the conflict in the region, especially the French Initiative, and affirmed that the State of Palestine will continue its global efforts to join treaties and international organizations, and will continue to defend its people through all available legal and peaceful means.

“Hasn’t the time come for this injustice to end? For this suffering to stop? For the Apartheid Wall to fall? For those military roadblocks, and humiliation, to stop? For the siege on Gaza to be lifted?” Abbas stated, “Our people deserve to live in freedom and dignity in their homeland, and elsewhere. This racist, colonialist occupation must end so that we can implement the two-state solution.”

He also said that the 6000 Palestinians imprisoned by Israel must be freed, and called for “ending the longest occupation in history.”

Commenting on the internal situation, Abbas said the Palestinian leadership would continue to seek unity, and geographical contiguity, and added that the Palestinians will not accept partial solutions.

“We will also seek to form a new government that abides by the agenda of the Palestine Liberation Organization,” he said, “And then we will hold legislative and presidential elections.”