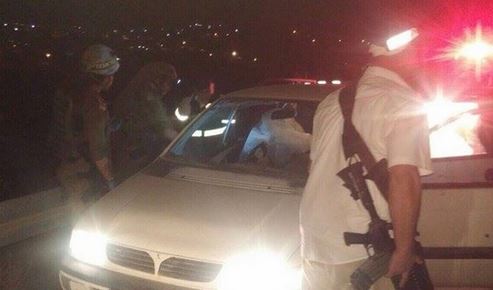 Israeli sources have reported, on Thursday evening, that a husband and his wife, living in the Naria Israeli settlement in the northern part of the occupied West Bank, were killed in a shooting attack. Their children, who were with them in the car, were not hurt. The sources said the slain couple, Eitam Henkin and his wife Naama Henkin, are in their 30s, and that they were driving along with their four children, who are between the ages of four months and nine years of age.

The attack took place between of Itamar and Elan Moreh Israeli colonies, in the northern part of the occupied West Bank.

The Israeli army said it is conducting extensive searches in the area, in an attempt to locate and apprehend the shooters.

Israeli medics rushed to the scene, and said the husband and his wife, were shot in the upper body, and were declared dead at the scene, Israeli Ynet News has reported.

Israeli Prime Minister Benjamin Netanyahu said the attack was the outcome of what he called “Palestinian incitement,” and claimed that the attackers “knew they were killing a mother and father, because their children were with them in the car.”

Also, an Israeli woman was injured, on Thursday at night, after stones were hurled on her car, while driving near Itzhar Junction, in the occupied West Bank.

Israeli sources said the slain settler, Eitam, is a reserve officer of the ‘Sayeret Matkal’ (General Staff Reconnaissance Unit), which is a Special Forces Unit – a field intelligence-gathering unit that operates behind what Israel calls ‘enemy lines to obtain strategic intelligence.’

The unit, established in 1957, conducts ‘counter-terrorism and hostage rescue operations in behind enemy lines.’ It includes among its ranks former combatants and senior military leaders, one them was Ariel Sharon, the deceased Israeli Prime Minister.

The Islamic Resistance Movement (Hamas) issued a statement blessing the attack, and considered it ‘a natural response to the increasing, and ongoing crimes carried out by Israeli soldiers and settlers, especially the burning of burning of the Dawabsha family after firebombing their home in Douma village, near Nablus on July 31 2015.’

Ali Dawabsha, 18 months of age, was was burnt to death, while his father Sa’ad, and mother Reham, suffered serious burns, and died of their wounds. Ahmad, five years of age, is the only survivor, and is still receiving treatment at an Israeli hospital for severe burns.

Following the Thursday fatal shooting, dozens of Israeli settlers living in a number of illegal colonies, attacked homes in Burin village and Huwwara town, south of Nablus, and tried to destroy one home.

The army closed various roads and intersections, south and southeast of Nablus, and prevented the Palestinians from crossing, while the Huwwara Local Council opened its doors to host the residents who were unable to return home.