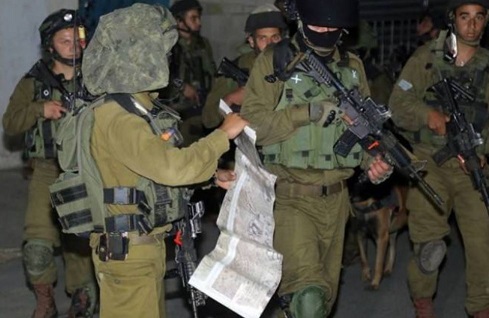 Medical sources have reported, on Friday at dawn, that several Palestinians, including many children, suffered the effects of tear gas inhalation after Israeli soldiers invaded Sinjel town, north of the central West Bank city of Ramallah.The sources said that dozens of soldiers invaded the town, and clashed with scores of local youths, who hurled atones and empty bottles, while the army fired rounds of live ammunition, and dozens of gas bombs.

Some of the gas bombs directly struck homes in the town, causing many families to suffer the effects of tear gas inhalation.

Dozens of soldiers have also been deployed around Sinjel and the nearby town of Tormos Ayya, after hundreds of settlers gathered there.

They also hurled stones on Palestinian cars, driving near the Beit El illegal settlement, north of Ramallah, and placed nails on the roads to puncture their tires, before throwing stones at them.

In related news, dozens of settlers gathered on Friday at dawn near the Beit Einoun junction, and the eastern entrance of Hebron city, in the southern part of the West Bank, and near Palestinian homes close to the Keryat Arba illegal colony, east of Hebron.

Dozens of soldiers were also deployed in the area, fired rounds of live ammunition, and concussion grenades at Palestinians walking nearby, the Palestinian News & Info Agency said.