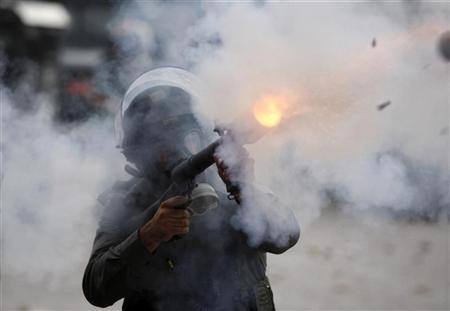 Israeli soldiers invaded, earlier Monday, several Palestinian communities in the occupied West Bank and Jerusalem, violently searched homes and property, and kidnapped nine Palestinians. The army attacked and injured a woman in her home, while many residents suffered the effects of tear gas inhalation.The Palestinian News & Info Agency (WAFA) has reported that the soldiers invaded the home of Badea’ Shafiq Snober, 47, in Yitma village, south of the northern West Bank city of Nablus, and kidnapped him, after violently searching his property, causing damage.

The soldiers also attacked Badea’ wife, Eman ‘Othman, 45, as she tried to stop them from ransacking her home and kidnapping her husband, causing various cuts and bruises.

Dozens of army vehicles also invaded the towns of Huwwara, Beit Forik, Osarin and Qabalan, searched and ransacked several homes, and withdrew without conducting any arrests.

In addition, soldiers kidnapped Yahya Mohammad Hajj Mohammad, from Nablus city, after storming his home and searching it, and repeatedly struck him with their batons, and iron bars, while their dogs mauled him, causing cuts and bruises to several parts of his body.

Another Palestinian, identified as Zeid Younis, was kidnapped in his village Iraq at-Tayeh, after the soldiers stormed his store, deliberately damaged his property and goods, and stole sums of cash.

Furthermore, soldiers kidnapped Qusai Zaher Barghouth, from Baqat al-Hatab village, after stopping him on a roadblock near Jeet village, east of the northern West Bank city of Qalqilia.

The Wadi Hilweh Information Center in Silwan (Silwanic) said clashes took place in the neighborhood, and that the soldiers fired dozens of gas bombs, concussion grenades and rubber-coated steel bullets.

Similar clashes took place near the Shu’fat refugee camp, especially near the military roadblock installed close to the main entrance of the camp.

In addition, soldiers invaded the Palestine Technical Academy, in al-‘Arroub north of the southern West Bank city of Hebron, after surrounding it, and prevented the students from entering or leaving it.

The soldiers then kidnapped a student, identified as ‘Amro Jamil Ahmad al-‘Allami, 20 years of age.

Mohammad Awad, spokesperson of the Popular Committee against the Wall and Settlements in Beit Ummar, said the soldiers prevented him from documenting their invasion, and detained him.

He added that the soldiers held him and al-‘Allami for three hours at the Etzion military base, north of Hebron, and released him but kept al-‘Allami.

In related news, soldiers fired gas bombs at dozens of residents, and homes, in the al-‘Arroub refugee camp, north of Hebron.

The Red Crescent Society in Hebron said many residents received treatment for the effects of tear gas inhalation.

On Monday at dawn, soldiers invaded two villages in the northern West Bank city of Jenin, clashed with local youths, causing many Palestinians to suffer the effects of tear gas inhalation, and kidnapped a Palestinian near Bethlehem.