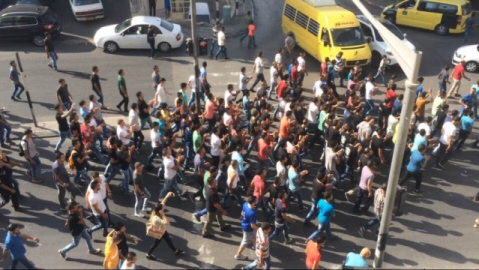 A RIOT has reportedly broken out on the main street of Bethlehem city, as Palestinians protest the killing of 13-year-old schoolboy Abdul Rahman Obeidallah by Israeli snipers, in Aida refugee camp.Hundreds of angry protesters chanting “Allah Akhbar”, a traditional cry against injustice, blocked the road towards Rachel’s tomb after the boy, who was around 5ft 4″ tall, was shot by Israeli snipers whilst still wearing his school uniform.

As the demonstration arrived near the 300 Israeli military checkpoint annexed to the wall north of Bethlehem, IOF immediately fired teargas and sound grenades to repress it. However, intense clashes are still continuing inside the camp.

Photographs from the scene show him being carried away from the violence still wearing his school uniform and backpack.

Another schoolboy was wounded in the shooting, still in surgery at the Beit Jala hospital.
He was shot during a second day of violence at Aida refugee camp, in Bethlehem in the West Bank.

Another schoolboy was reportedly shot in the head. Still to be identified, he is currently undergoing emergency surgery at the government run hospital in Beit Jala, around 1km away.

The pair were rushed to the hospital around 1.45 pm but Abdul-Rahman was pronounced dead shortly afterwards.

One witness, who accompanied the casualty to hospital, said shortly before the news of the boy’s death was known: ” I was walking back to my home in the camp when it happened. They got hit by real bullets, live ammunition.

“Their family is here, there are a lot of people. It’s just tense, we’re waiting to hear.”

One local, who did not wish to be named, said: “He was doing nothing. He was just looking. He had come home from school and his mother had sent him to the shop.

“He was just standing, looking. And they shot him right here, in the chest. It opened right up, huge, and he died in the hospital. His mother and his father, they are going mad”.

Violent clashes broke out near Bethlehem, on Sunday afternoon in response to the shooting of Palestinian student Fadi Alloun (19) in Jerusalem on Saturday.

Israeli forces fired tear gas and rubber bullets at around 100 protesters at Aida refugee camp at around 4pm, and clashes continued into the night.

Four Palestinian youngsters have been shot dead by IOF within the past two days alone, and about 200 people have been reported injured at locations all over the West Bank.