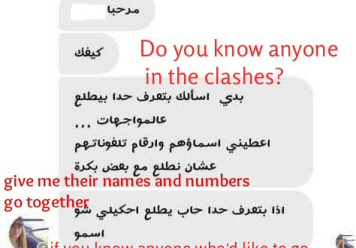 A number of Palestinian activists on social media have published anonymous messages with Arabic names, that are asking for “names of protesters,” especially in Jerusalem, saying that it’s only “to join them in the clashes.”The messages started flowing on Friday, according to PNN, and there have been several warnings not to reply, accept friend requests, or give out any type of information.

Media sources said that Israeli intelligence have launched these accounts to monitor the protesters.

The accounts have Palestinian flags as their cover photos, with Arabic names, local numbers, and use the Arabic language.

Israel has long used social media, especially Facebook, to monitor activists and indeed arrested a number of people for their “anti-Israel” posts.