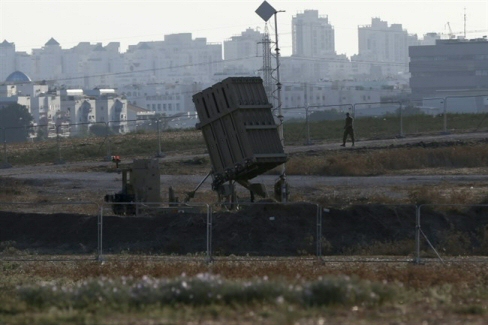 No injuries were reported, and she said she was not aware of any further shells fired by the Palestinian resistance.

Palestinians in Gaza, who have no such defense system, were bombarded Saturday night by Israeli fighter jets.

A family home was hit by the Israeli bombing, killing a pregnant woman and her two-year old child, and badly wounding the father and three other children.

On Saturday, Israeli forces fired live rounds into a crowd of demonstrators in the Gaza Strip, killing two Palestinian boys, aged 13 and 15, at a rally east of Khan Younis on Saturday.

Seven Palestinians were fatally wounded by Israeli live gunfire at a demonstration in Gaza the day before.

Since October 1st, 21 Palestinians have been killed, and 1100 injured. During that same time period, two Israelis were killed and two injured in a ‘lone wolf attack’ by a Palestinian man in Jerusalem.

A small number of homemade shells were fired from Gaza during the past ten days in response to the massive Israeli escalation, but no injuries or damage was reported from these shells.

Israel hold the Hamas government in Gaza responsible for each homemade shell fired, despite there being no link between these shells and Hamas.

Hamas has not claimed responsibility for any homemade shells since last year’s devastating war, and the movement has been attempting to clamp down on many of the smaller armed groups.

Earlier Saturday, however, Hamas spokesman Sami Abu Zuhri warned Israel that because of the recent string of Israeli war crimes against the Palestinian people, the Palestinians will defend themselves — despite their rther complete lack of weaponry or armed forces.

US to Raise Finance of Israeli ‘Iron Dome’ Defense System