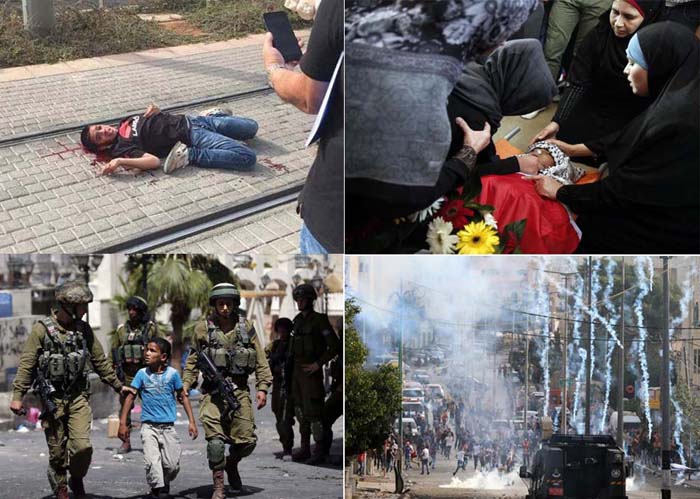 Israeli attacks in the West Bank and Jerusalem:

In the West Bank, Israeli forces killed 12 Palestinian civilians, including 3 children. The killings committed by Israeli forces and police officers in Jerusalem were as follows:

On the same day, Israeli police officers opened fire at Ishac Badran (16), from Kufor Aqeb village, north of East Jerusalem, after he had stabbed 2 settlers in al-Mesrara area, opposite to al-Amoud Gate in the Old City in East Jerusalem. As a result, he sustained several bullet wounds and was left bleeding to death without being offered medical treatment.

Also on the same day, Israeli forces opened fire at Mohammed Ali (19), from Shu’fat refugee camp, after he stabbed 2 Israeli special police officers from ‘Yasam’ Unit in al-Amoud Gate area in the Old City in East Jerusalem. As a result, he was killed by several bullets.

On 12 October 2015, Israeli forces opened fire at Mostafa al-Khateeb (18), from Sour Baher village, south of East Jerusalem, once he stepped out of his car near al-Asbat Gate, which is one of the Old City gates in the city. As a result, he was killed by several bullets.

On the same day, Israeli forces opened fire at Hassan Mahayna (Manasra) (15) and deliberately ran down his cousin, Ahmed Mahayna (Manasra) (13), both are from Beit Hanina village, north of East Jerusalem. They were heading to a mall near their family houses in ‘Pisgat Ze’ev’ settlement. As a result, the first child was killed by several bullets and the other one sustained serious wounds. Israeli forces claimed that the 2 boys stabbed 2 settlers.

On 13 October 2015, an Israeli security guard fired 3 bullets at Alaa Abu Jamal (33), from al-Mukaber Mountain, southeast of occupied East Jerusalem, at a bus stop on ‘Malkhei Yisrael’ Street in West Jerusalem. In the meanwhile, an Israeli Border Guard officer arrived and killed Abu Jamal by a number of live bullets. Abu Jamal’s car belonging to Israeli phone company ‘Bezeq’ deviated towards 3 Israelis at the abovementioned bus stop. He then stepped out of the car holding a knife and stabbed a number of Israelis at the bus stop.

On the same day, Baha’ Elayan (22) was killed and Belal Ghanem (23) was wounded, both are from Jabal al-Mukaber village, southeast of Jerusalem, while carrying out a shooting and stabbing attack in an Israeli bus in al-Mukaber Mountain. Ghanem has been at an Israeli hospital after he sustained serious wounds while being under arrest.

In other cities throughout the West Bank, on 09 October 2015, Israeli forces deployed along the road between the Ibrahimi Mosque and ‘Kiryat Arba’ settlement, east of Hebron, killed Mohammed al-Ja’bari (19), from Khellet Hadhour, southeast of the city.

On 10 October 2015, a medical source at the Ahli Hospital in Hebron pronounced Ibrahim Awad (28), from Beit Ommer village, north of Hebron, dead of wounds he had sustained in the head on 08 October 2015, during clashes between Palestinians and Israeli forces.

On 11 October 2015, Ahmed Sharaka (13), from al-Jalazoun refugee camp, north of Ramallah, was killed by a bullet to the head during clashes with Israeli forces at the DCO checkpoint, north of al-Bireh.

On 13 October 2015, Israeli forces stationed around Belal Bin Rabah Mosque, north of Bethlehem, killed Mo’taz Zawahra (21), from al-Dheisha refugee camp, south of the city, after they opened fire at Palestinian stone throwers. Zawahra was hit by a live bullet to the chest and was pronounced dead minutes after being admitted to Beit Jala Governmental Hospital.

During the reporting period, 420 Palestinian civilians were wounded in the West Bank, including 183 civilians in occupied East Jerusalem.

Israeli forces have turned the West Bank into cantons and continued to impose an illegal closure on the Gaza Strip for the 9th consecutive year. Many checkpoints were established in the West Bank and many others were re-established. 6 Palestinian civilians, including 4 children, were abducted at checkpoints.

In the Gaza Strip, Israeli forces killed 11 Palestinian civilians, including 2 children and a woman, and wounded 187 others, including 47 children, a woman and 6 journalists.

In excessive use of lethal force, on Friday, 09 October 2015, Israeli forces killed 7 Palestinian civilians, including a child, and wounded 67 others, including 16 children and a Turkish photojournalist, in 5 different locations near the border between the Gaza Strip and Israel. Field investigations indicate that Israeli forces used excessive lethal force in the Gaza Strip in violation of the principles of proportionality and military necessity. Many of the Palestinian victims were shot in the upper parts of their bodies, reflecting an Israeli intention to cause maximum casualties among Palestinian civilians, who did not pose any serious threat to the lives of Israeli soldiers stationed in fortified military sites far away from the demonstrators.

According to investigations conducted by PCHR, at approximately 13:15 on Friday, 9 October 2015, dozens of young men and children headed to the border between the Gaza Strip and Israel, particularly the vicinity of Nahal Ouz military post, to the east of al-Shujaiya neighborhood in the east of Gaza City, to express solidarity with the popular uprising in the West Bank, including East Jerusalem. Once they approached the border and threw stones at Israeli forces stationed behind it, Israeli forces opened fire at them. As a result, 4 Palestinian civilians were killed and 31 others, including 11 children, were wounded. A Turkish journalist, Metin Kaya, an Anadolu Agency photojournalist, was also injured as a bullet hit his camera and its shrapnel hit his fingers.

At approximately 14:45, dozens of young men and children gathered in the east of al-Farrahin area in Abassan village and Khuza’a village, east of Khan Yunis. They headed towards the border between the Gaza Strip and Israel raising Palestinian flags. Once they approached the border and threw stones at Israeli forces stationed there, Israeli soldiers opened fire at them. Israeli soldiers continued to fire at the Palestinian demonstrators sporadically until the evening. As a result of the Israeli gunfire, two Palestinian civilians, were killed and 11 others were wounded, including a young man who was seriously wounded and was pronounced dead on Saturday morning.

On 10 October 2015, 2 Palestinians, including a child, were killed when Israeli forces stationed along the border fence, east of Khan Yunis, south of the Gaza Strip, opened fire at Palestinian protestors. Moreover, they wounded 3 others. Six Palestinian civilians were wounded, including 2 children, in 2 separate protests around Beit Hanoun (Erez) crossing and in the east of al-Shouka village, east of Rafah. On 11 October 2015, a Palestinian civilian was wounded around Beit Hanoun crossing in similar circumstances.

In a heinous willful killing crime, on 11 October 2015, an Israeli warplane fired two missiles at a 160-square-meter house belonging to Yehya Sa’di Mohammed Hassan (26) in al-Zaitoun neighborhood, south of Gaza City. As a result of the explosion that rocked the area, 5-month pregnant Nour Rasmi Mohammed Hassan (26) and her child, Rahaf Yehya Sa’di Hassan (3), were killed. Moreover, Nour’s husband sustained shrapnel wounds throughout his body and fractures to the legs and their son, Mohammed Yehya Sa’di Hassan (5), sustained shrapnel wounds throughout the body. Three others, who are the cousins of Yehya and living near his house, including a child.

Israeli settler/paramilitary forces escalated their attacks against Palestinian civilians and property and settlement activities continued in the West Bank.
The settlers attacked Palestinian vehicles and seriously wounded a Palestinian civilian.
On Thursday afternoon, 08 October 2015, a number of settlers from ‘Kiryat Arba” settlement established on Palestinian lands in the eastern side of Hebron attacked civilians’ houses adjacent to the aforementioned settlement from the western side with stones and tried to burn empty shades. As a result, families and children were terrified. All of this happened under the Israeli forces’ intensive protection as they stood still watching the settlers’ attacks.

On the same day, a group of settlers from a Subaru car traveling an Israeli registration plate threw stones at the Palestinian cars on ‘Yitsahar’ road branching from Ramallah-Nablus Street. The windows of 3 vehicles passing on this Street were broken, and a child and his father were injured in their faces. The father’s condition was described as critical and was taken to ‘Beilinson’ Hospital in Israel, while the 9-year-old child sustained wounds to his face and fracture in the nose. His condition was described as stable.

On 10 October 2015, a group of settlers from ‘Nof Zion’ settlement in Jabal al-Mukaber village, attacked Ms. Yosra Zahayka and her 2 kids while going back home in the village. She could drive and escape along with her 2 children, who were exposed to danger.

Israeli forces continued their attacks on nonviolent demonstrations held each week in the West Bank.

At approximately 13:30 on Friday, Palestinian civilians and Israeli and international human rights defenders organized a protest in the center of Kafor Qaddoum village, northeast of Qalqilya, heading to the eastern entrance of the village in protest against closing that entrance since the beginning of al-Aqsa Intifada with an iron gate. When they arrived at the entrance of the gate, the demonstrators were met by live bullets, tear gas canisters, rubber-coated steel bullets, sound bombs. As a result, a 60- year-old civilian sustained 2 bullets wounds to the abdomen and the right thigh. He was then taken to Rafidah Governmental Hospital in Nablus to receive medical treatment.

Following the Friday prayer on 02 October 2015, dozens of Palestinian civilians and international and Israeli human rights defenders organized a peaceful demonstration in Bil’in, west of Ramallah, in protest against the annexation wall and settlement activities The protestors tried to sneak the fence. Israeli soldiers stationed behind the wall, fired live bullets, rubber-coated steel bullets, tear gas canisters and sound bombs and chased them into the olive fields and into residential houses in response. As a result, many civilians suffered tear gas inhalation and others sustained bruises as Israeli soldiers beat them up.

On the same day, dozens of Palestinian civilians organized a peaceful demonstration in the center of Ni’lin village, west of Ramallah, in protest against the Annexation Wall and Settlement Activity. The demonstrators took the streets and headed to the annexation wall. Israeli forces prevented the demonstrators from crossing to the land behind the Annexation Wall, so they threw stones at them. Israeli soldiers fired live bullets, rubber-coated metal bullets, sound bombs and tear gas canisters at the civilians, and chased them into the village. As a result, many civilians suffered tear gas inhalation and others sustained bruises as Israeli soldiers beat them up.

Around the same time, dozens of Palestinian civilians and Israeli and international human rights defenders organized a peaceful demonstration in al-Nabi Saleh village, southwest of Ramallah, in protest against the annexation wall and settlement Activity. The demonstrators headed to the lands that the settlers are trying to rob by force near “Halmish” settlement. Israeli forces had closed all the entrances of the village since the morning to prevent them from participating in the demonstration. When they arrived at the aforementioned land, the demonstrators were met by live bullets, tear gas canisters, rubber-coated steel bullets, sound bombs and were chased into the village. As a result, many civilians suffered tear gas inhalation and others sustained bruises as Israeli soldiers beat them up.

Due to the number and severity of Israeli human rights violations this week, the PCHR made several recommendations to the international community. Among these were a recommendation that the international community acts to stop all Israeli settlement expansion activities through imposing sanctions on Israeli settlements and criminalizing trading with them.

In addition, the PCHR callsed upon the UN General Assembly to transfer the Goldstone Report to the UN Security Council in order to refer it to the International Criminal Court in accordance with Article 13(b) of the Rome Statute