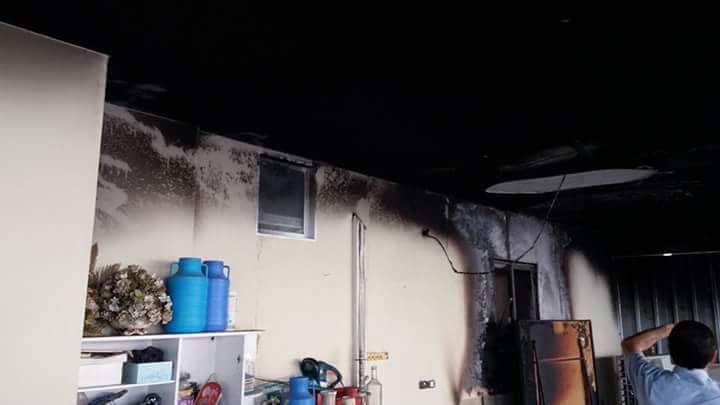 A Palestinian home, belonging to members of Harb family, close to Rachel Tomb north of the Palestinian West Bank city of Bethlehem was burnt after being targeted with dozens of Israeli gas bombs.The Radio Bethlehem 2000 has reported that Israeli soldiers fired nearly 30 gas bombs at the home, causing several parts of the property to catch fire and burn.

Family members were unharmed as they ran out of their property when the army started targeting it. Nadia Hanna Zoabi Harb said the family is fine, but their property has been badly burnt.

Clashes between Palestinian youths and Israeli soldiers took place near the Bilal Bin Rabah Mosque, north of Bethlehem, in addition to Beit Fajjar town, Um Rokba area and the al-Khader town, south of Bethlehem, and in Dar Salah village east of the city.

Medical sources said one four Palestinians were shot by a rubber-coated steel bullet; one in the head and three in lower body parts, while others were shot by live rounds in the legs, and dozens of residents suffered the effects of tear gas inhalation.

In addition, one Palestinian suffered a dislocated shoulder after falling down while being chased by Israeli soldiers, close to the northern entrance of Bethlehem.

In related news, Israeli sources said a settlement bus was burnt, and its driver was injured, after Palestinian protestors hurled Molotov cocktail on the vehicle, east of the northern West Bank city of Bethlehem.

Israeli sources said the bus has no passengers in the time of the attack, and that dozens of soldiers and firefighters rushed to the scene. The army initiated a large search campaign in the area.