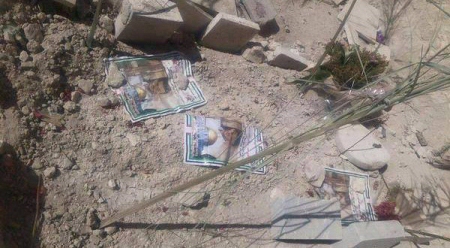 The grave of a young Jerusalem man whose dead body was kicked by settlers has been attacked.A photo on social media (below) this morning (Friday) show the grave of the 21-year old, as well as flowers, scattered in the dust at his burial site.

Several of the stones around the grave also appear to have been smashed, according to PNN.

Fadi, from Al-Issawiya town, occupied East Jerusalem, was executed by the Israeli police nearly two weeks ago, after an Israeli settler shouted that he was trying to initiate a stab operative, in Jerusalem.

A graphic video shared online showed that Israeli forces hit the youngster with seven bullets, leading to his immediate death.

It went on to show how settlers then gathered around him and started kicking his dead body.

Dozens of private police forces units broke into the home of the youngster hours after his execution, raided it and kidnapped his father, brother and uncle.

The killing led to uproar across the Arab world, and has been blamed for much of the violence.