VIDEO: Another Palestinian Killed after Alleged Stab Attack on Soldier 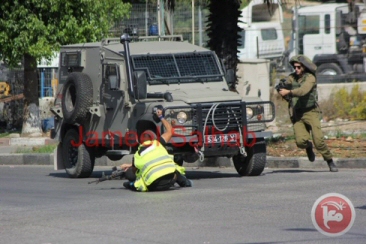 Israeli forces shot and killed a Palestinian man near the illegal Kiryat Arba settlement in Hebron, Friday, after he allegedly stabbed a soldier in the area.

A Palestinian news crew from Al-Quds TV captured the incident while reporting live in the area, with footage showing Israeli forces surrounding a Palestinian man lying injured on the ground and appearing to open fire.

Israel’s army said a soldier was stabbed and moderately wounded by an assailant disguised as a ‘news photographer’.

A journalist who witnessed the incident told Ma’an News Agency that he saw a man wearing a yellow vest marked ‘PRESS’ stabbing an Israeli soldier.

Israeli forces then opened fire multiple times, with another soldier reportedly injured by friendly fire during the incident.

The attacker was identified as Eyad Khalil Awawda, 26, from the Hebron district town of Dura.

The Foreign Press Association released a statement following the incident deploring the ‘violation of press privilege’ and called on Palestinian media to verify all media credentials to prevent violations.

Israeli forces assaulted Palestinian journalists in the area attempting to cover the incident, threatening that they would open fire unless they left.

Locals said Israeli soldiers prevented the Red Crescent from reaching the area to treat the man.

Shortly after Friday’s stabbing, clashes broke out at the northern entrance of Hebron, Ras al-Jura, between Palestinian youth and Israeli forces, leaving at least nine Palestinians injured by live Israeli fire, 11 with rubber-coated steel bullets, and 45 with tear gas.

The Palestinian Red Crescent said that injured were also evacuated from Beit Einun area in northeastern Hebron, adding that a Palestinian ambulance was targeted during clashes, lightly injuring medics.

The clashes broke out during a march called for by the political, national, and Islamic forces of the Hebron district that set off from a mosque in the area.

Clashes also erupted at the northern entrance of the nearby town of Beit Ummar where hundreds of Palestinian youths threw rocks at an Israeli military checkpoint set up at the town’s entrance. Eight Palestinians were injured, two with live fire during the clashes.

Yasin Adel Ahmad Mtallaq Za’aqeeq,11, was shot with a live bullet in the left ankle, and Amir Shawkat Abd al-Rahman Alqam, 20, was shot in the left elbow. They were taken to a hospital in Hebron via alternate routes after Israeli forces closed the village entrance, spokesman for the popular resistance committee in the village, Muhammad Ayyad Awad, said.

Six others were injured with rubber-coated steel bullets and were treated on the scene, while Basil Jamal Mohammad Breigheth,17, and Tariq Nasir Hilmi Abu Ayyash,16, were detained by Israeli forces.

Awad added that Israeli forces sprayed homes in the village with skunk water.

An Israeli army spokesperson did not have immediate comment on Hebron-area clashes.
The Hebron area is one of several across the occupied West Bank that has seen increasing clashes and attacks in recent weeks.

Earlier this week Israeli forces raided homes in Hebron belonging to the families of three Palestinians killed after carrying out alleged attacks. The raids came as Israeli Prime Minister Benjamin Netanyahu has called for punitive demolitions for the family homes of suspected attackers.
As tensions rise across the occupied Palestinian territory, over a thousand have been injured by Israeli live fire and rubber-coated steel bullets in the past two weeks.

Rights group have called on the Israeli government to halt widespread use of excessive force and collective punishment of Palestinians across the area.