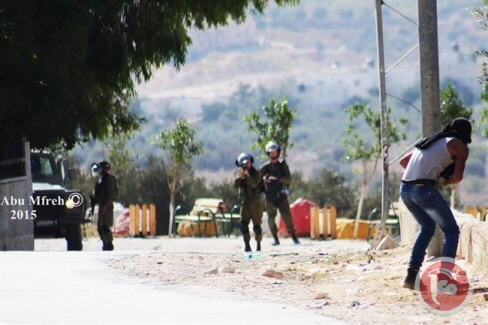 Five Palestinians have been killed, and at least 300 injured by live Israeli fire, rubber-coated steel bullets, gas bombs and concussion grenades, in the occupied Palestinian territory on Friday, the Palestinian Ministry of Health said.Ehab Jihad Hanani, aged 19, was shot dead by Israeli forces during clashes in Nablus, Yahia Abdul-Qader Farhat, 24, and Mahmoud Hatem Hmeid, 22, were killed during demonstrations in the Gaza Strip, and Shafiq Jamal Jabr, 37, died from wounds sustained during a demonstration in the Gaza Strip last week.

The Nablus office of the Red Crescent said 22 Palestinians were injured, during clashes in Huwwara and Beit Forik, near Nablus.

The soldiers also opened fire on an ambulance belonging to Aqraba town, near Nablus, shattering its rear window.

In addition, the army assaulted several journalists in various areas in the northern part of the West Bank, and fired concussion grenades at journalists near the Huwwara military roadblock, before forcing them away.

Separately, Eyad Khalil Awawda, 26, was shot dead after stabbing an Israeli soldier in the illegal Kiryat Arba settlement in Hebron.

Friday marked another deadly day in the occupied Palestinian territory, where clashes between Palestinians and Israeli military forces have erupted on a near-daily basis since the beginning of the month.

In Bethlehem, at least 12 were injured during clashes with Israeli forces at the northern entrance to the town.

Head of the ambulance and emergency department in Bethlehem, Muhammad Awad, told Ma’an News Agency that three youths were injured by live fire in the legs, five with rubber-coated steel bullets, and four suffered from severe tear gas inhalation.

During the clashes, Israeli forces fired tear gas into a nearby home where two women and three children were helped outside by locals and aided by medics.

In Bethlehem area town of Teqoua’, Israeli forces reportedly raided the area while firing stun grenades, tear gas, and rubber coated steel bullets. In the southern Bethlehem town of al-Khader, on Palestinian was shot in the foot with a live bullet while others suffered from tear gas inhalation.

Meanwhile in the al-Balou neighborhood of the al-Biereh area of the Ramallah district, 15 Palestinians were injured Friday during clashes with Israeli forces, including nine with live fire in the legs, four with rubber-coated steel bullets, including one in the head, and two from severe tear gas inhalation.

The injured were transferred to the Palestine Medical Center in Ramallah, and photojournalist Muhammad al-Arouri — injured with a rubber-coated steel bullet in the leg — was aided on scene by Red Crescent medics, locals said.

The clashes had erupted following a march called for by the political, national, and Islamic forces of the district.

Hundreds of youths reportedly gathered on the side of a nearby hill to watch the clashes, but were also targeted by Israeli forces who fired tear gas bombs at the groups.

An Israeli army spokesperson told Ma’an that in al-Biereh and Bethlehem areas, ‘rioters’ rolled burning tires and hurled rocks at Israeli forces, who responded with ‘riot-dispersal means.’ In al-Biereh, the spokesperson said that .22 caliber rounds were fired at the ‘main instigators,’ while rubber-coated steel bullets were fired at demonstrators in Bethlehem.

Two Palestinians were also injured by live fire in the Ramallah area town of Budrus.

In the nearby village of Bilin, Israeli forces fired rubber-coated steel bullets, tear-gas bombs and stun grenades at protesters as they approached the Israeli separation wall in the area.

Locals told Ma’an that the forces chased protesters between olive trees and caused dozens of Palestinians, Israeli and international activists to suffer from tear-gas inhalation.

Armed clashes between a group of Palestinian youths and Israeli forces also erupted on Friday in the town of Silwad northeast of Ramallah.

The two sides reportedly exchanged fire at the western entrance of the town after an armed group opened fire at Israeli forces attempting to raid the area. Israeli forces retreated and armed clashes continued sporadically throughout the day.

Clashes had erupted earlier in the day between youths and Israeli forces in the town, and Palestinian medical sources reported five injuries from live Israeli fire.

Injuries were also reported as clashes carried on throughout the day on Friday in the Hebron area.
At least 37 Palestinians have been killed by Israeli forces since Oct. 1, 14 of whom were killed in the Gaza Strip. The majority of Gazans were killed during demonstrations, while a pregnant mother and her two-year-old daughter were killed in an Israeli airstrike on their home.

Hamas leader Ismael Haniyya called on Friday for the ‘Intifada’ to continue, while the Palestinian Authority has rejected the claim that the territory has entered a long term uprising, insisting that the wave of violence can be controlled and peace restored.