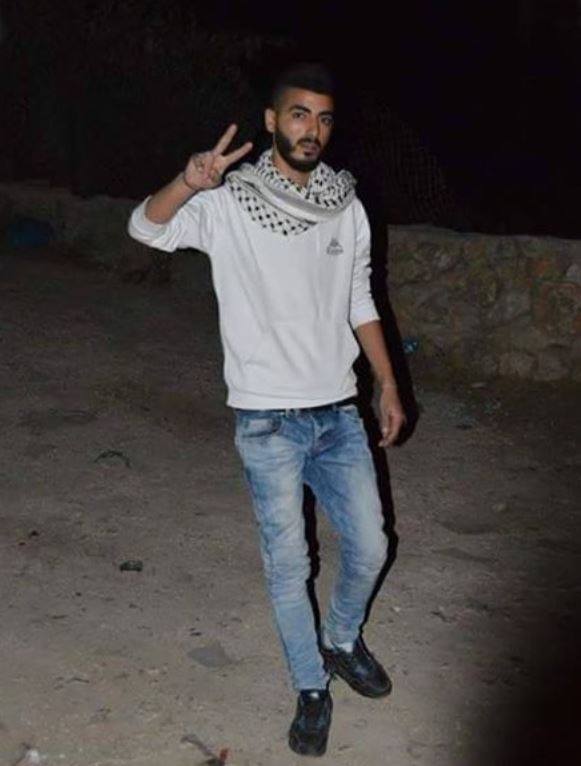 A right-wing Israeli paramilitary settler shot and killed a Palestinian teenager Saturday morning on Shuhada Street in the center of Hebron, in the southern part of the West Bank.Video footage captures the immediate aftermath of the shooting, in which an Israeli paramilitary settler dressed in white holds two guns and directs the Israeli soldiers toward the body of the boy he killed.

The 18-year old victim was identified as Fadel al-Qawasmi, 18.

Paramedics with the Palestinian Red Crescent were denied access to the dying teen, and Israeli troops took the body away without allowing any medical personnel or family members near the body.

Although the Israeli paramilitary settler who executed the teen claimed that Fadel came at him with a knife, no evidence of this claim has been produced. In the past, on numerous occasions, initial claims that Palestinians attacked Israelis have turned out, on later investigation, to be false.

Local resident Mufeed Sharabati told reporters with the Ma’an News Agency that after the execution of Fadel on the street, Israeli paramilitary settlers were seen walking around the streets of Hebron distributing candy to one another in celebration of the execution.

Israeli forces did not take the killer into custody.

Shuhada Street, where the murder took place, is the site of a long history of Israeli paramilitary violence against the indigenous Palestinian population.

Following the massacre of 27 Palestinian civilians praying in the Ibrahimi Mosque in central Hebron in 1994 by American doctor Baruch Goldstein, Israeli authorities sectioned off the mosque and made half of it into a synagogue. Since that time, the Israeli government has allowed and promoted Israeli paramilitary settlement colonies in the center of the city of Hebron.

In Shuhada Street, Israeli paramilitary settlers took over the top floors of a number of Palestinian homes, and used these as a base from which to attack and torment the Palestinians as they shopped in the central market of Hebron, located on Shuhada Street. For years, the settlers dropped rocks, eggs, and human excrement onto Palestinian shoppers and schoolchildren on a nearly-daily basis, in an effort to push Palestinians out of the area. Palestinians who lived and worked below put up nets to try to catch the objects thrown at them by the paramilitary forces above.

Israeli military authorities allowed the harassment to continue without consequence, and most Palestinian shopkeepers were eventually pushed out of Shuhada Street. The paramilitary settlers who have moved into the area over the past twenty years are all heavily armed, and most are adherents of an extreme right-wing ideology that consider Baruch Goldstein a hero, and follow the ideas of the anti-Arab Rabbi Meir Kahane, who called for the complete expulsion of the Palestinian people from their land, and justified the killing of non-Jews on biblical grounds.

Now, Shuhada Street is virtually deserted, with most Palestinians afraid to walk on it because of fear of attack by paramilitary settlers. But it remains the central street of Hebron, and Palestinian residents often need to walk there to get where they are going in the city.

Thousands of Israeli troops are deployed in the area to protect the hundreds of paramilitary settlers who have taken over Palestinian land in the center of Hebron and claimed it as a colony of Israel.

Saturday’s killing of Fadel al-Qawasmi marks the 38th Palestinian death in the month of October, but he is the first to be killed by a paramilitary settler this month. The others were all killed by Israeli soldiers or police.

Just three weeks ago, very near to the location of today’s murder, an 18-year old Palestinian girl, Hadeel al-Hashlamoun, was shot and killed by an Israeli soldier who shot her from ten feet away, execution style. Initially, Israeli authorities tried to claim that Hadeel had a knife, but video footage of the incident emerged, showing the girl with both her hands visible, and nothing in them.

Amnesty International condemned the killing of the girl as ‘extrajudicial assassination’, and called for an investigation. In its statement about that incident, Amnesty International said, ‘Even if al-Hashlamoun did have a knife, Israeli soldiers, who are protected with body armour and heavily equipped with advanced weapons, could have controlled the situation and arrested her without threatening her life. Open fire regulations of the Israeli military in the occupied West Bank allow soldiers to open fire only when their lives are in imminent danger, and Amnesty International concludes that this was not the case in the shooting of al-Hashlamoun, as she was standing still and separated from the soldiers by a metal barrier. There was no attempt to arrest al-Hashlamoun, according to the eyewitnesses, or to use non-lethal alternatives.

‘To then shoot al-Hashlamoun again multiple times as she lay wounded on the ground indicates that her killing was an extrajudicial execution. Unlawful and deliberate killings carried out by order of government or military officials, or with their complicity or acquiescence, amount to extrajudicial executions, which are prohibited at all times and constitute crimes under international law. An extrajudicial execution would also constitute a wilful killing, which is a grave breach of the Fourth Geneva Convention, which applies to Israel’s long-standing military occupation of the Occupied Palestinian Territories, and a war crime.’

Since the killing of Hadeel al-Hashlamoun on September 22nd, Israeli forces have killed 37 Palestinians — of these, around one-third were claimed to have had knives in their possession. All of those killed fall under the category of extrajudicial assassination, according to international law.