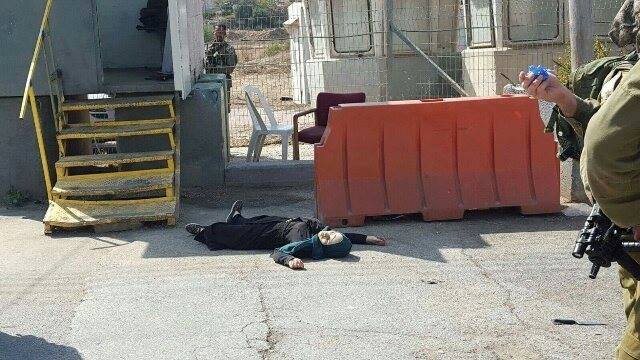 The slain child has been identified as Bayan Abdul-Wahab al-‘Oseyli, 16 years of age.

The Israeli army said the soldiers stopped ‘Oweisat on a roadblock, and started questioning him while examining his ID card, and ‘discovered that he carried a knife.’

Clashes took place in the Zawiya area, in the center of Hebron city, and the soldiers fired rubber-coated steel bullets, sounds bombs, in addition to dozens of gas bombs and concussion grenades; scores of Palestinians suffered the effects of tear gas inhalation.

The soldiers also fired gas bombs and concussion grenades at dozens of students, protesting in Ras al-Joura area, in Hebron, and prevented the residents from leaving their homes in the Shuhada Street.

In addition, groups of Israeli extremists attacked several Palestinian homes in the Shallala Street, in the heart of Hebron city.

On Saturday morning, an Israeli paramilitary settler shot and killed a Palestinian teenager on the Shuhada Street in the center of Hebron city, in the southern part of the West Bank.

On Friday, Israeli soldiers killed five Palestinians, and wounded around 300 others, in different parts of occupied Palestine