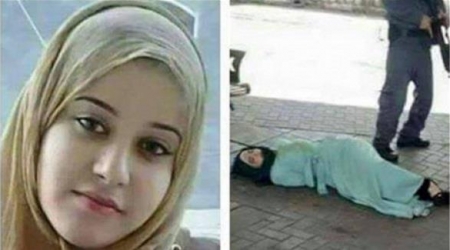 Israeli police sources confirmed, Saturday, that the Jerusalemite woman Israa’ A’bd, aged 29, who was shot previously, was not intending to carry out a stabbing attack at the bus station.A’bd was shot with more than six live bullets at Afula bus station, last Friday. Israeli police claimed at that time that she attempted to carry out a stabbing attack.

Media sources claimed, according to Al Ray, that Isra’a took out a knife for personal reasons and she was not intending to stab any one.

The Israeli police sources explained that Isra’a was holding a knife with her while she was on the bus to Afula station, but that she did not stab any Israeli. According to the sources, this matter poses a number of questions to investigators.

A’bd ,who works in a medical center, is in Poria Hospital under police guard.