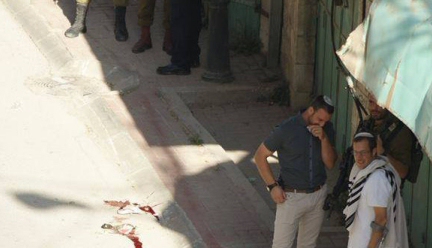 At least three witnesses to the fatal shooting of a Palestinian teenager, Saturday morning, have been abducted by Israeli forces.Ma’an News Agency reported that Mufeed Sharbati, an eyewitness and an Arab resident of Hebron where the incident took place, has been detained.

Israeli forces raided his home and confiscated a laptop, a video camera, and a stills camera.

The group had posted online video footage of soldiers and a settler surrounding 18-year old Fadil al-Qawasm, who was killed after the settler shot him.

And Christian Peacemaker Teams, a charity that escorts Palestinian children to school to ensure their safety, also said that a female member of their team was arrested by IOF troops and her camera was confiscated after she posted a photograph on Instagram.

An Israeli spokesman claimed that Fadil had tried to stab the settler, but social media is teeming with speculation that he was unarmed, with many claiming video footage shows a knife was “planted” on him after his death by Israeli troops.

PNN has inspected the footage, which is blurry and taken from some distance. One soldier is seen being handed an object by another soldier who then turns back towards the body. A third soldier then walks near to them, which blocks the view from the video camera. We have concluded it is impossible to tell what the object is from the footage alone.

The street is a hotbed of tension in the Old City.

Most of the residents are Jewish settlers, numbering around 600. They are allowed to walk freely on the street, whereas Palestinians must pass through an Israeli military checkpoint with a metal detector.