Video: Israeli Government Lies about Footage of Boy in Hospital 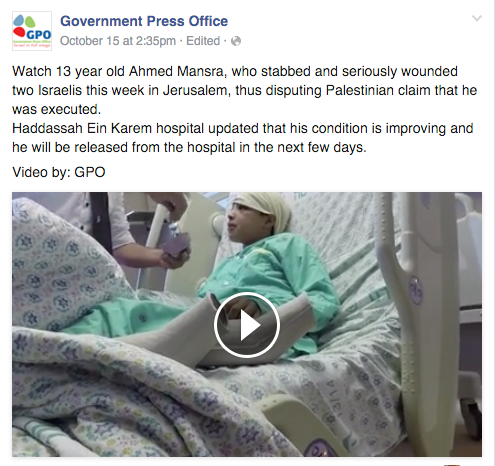 As soon as Palestinian President Mahmoud Abbas concluded his speech earlier this week, in which he spoke about the 13-year old boy Ahmad Manasra, Israeli media was flooded with images of the boy that the Israeli police shot and left to bleed for a long time.Abbas said the boy was left to bleed to death, however, Israeli media published photos of the boy in Hadassa University Medical Center in Ein Karem in Jerusalem, claiming that the boy is receiving good treatment at the hospital.

On Thursday the Israeli Government Press Office (GPO) published a video showing a man wearing a white shirt and a tie feeding the boy, who was on the hospital bed. The GPO focused on disproving Abbas’ claim that the boy had been “executed’.

But the footage did not show how Manasra’s right hand was chained to his bed, and the audio track of the video had also been removed.

On Friday, the Popular Struggle Coordination Committee published a statement in which it clarified that the group’s lawyer, Tareq Barghout, was the one who was feeding Manasra in the video, and they pointed out that his tie has the logo of Lawyers syndicate.

Barghout stated that Manasra told him that he was suffering serious pain in his jaw due to repeated punches on the face by Israeli soldiers and settlers, and could not chew his food. He added that the Israeli security guarding his room were treating him badly and threatening to kill him, and were constantly shouting at him.

Barghout also said that while he was feeding Manasra, someone entered the room and identified himself as being from the Israeli Prime Minister’s Office, and said that he was there to check on Manasra and make sure he was OK. Barghout said he believes that this man had a hidden camera, as the angle of the camera indicates that people in the room were not aware of the presence of this camera.

He accused Netanyahu’s Office of taking footage of the boy without his knowledge, which violates patient confidentiality.

For their part, the Israeli Physicians for Human Rights issued a statement in which it blasted the publication of the photo of the boy on his hospital bed.

The statement said, “The fact that it is a photo of a minor in custody who was photographed without his parents’ permission” is a violation of juvenile law and privacy laws.

In addition, the picture was taken at a medical facility “apparently with the approval of its management”.

The group said that this was be a violation of medical ethics requiring maintenance of the confidentiality of medical information and respect for the patient.