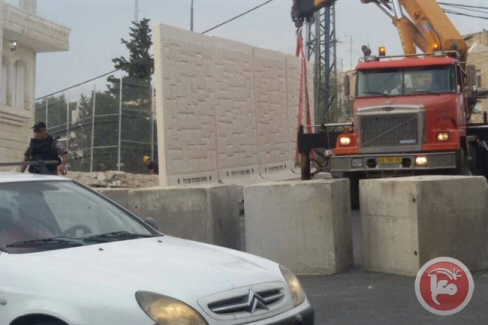 Israeli forces, on Sunday, began installing a large concrete wall in occupied East Jerusalem to separate the Palestinian neighborhood of Jabal al-Mukabbir from the illegal Israeli settlement of Armon Hanatziv.Witnesses told Ma’an that Israeli forces helped unload huge concrete blocks in the neighborhood, including the notorious T-shaped blocks used in Israel’s illegal separation wall that surrounds and cuts through the occupied West Bank.

Most of the concrete blocks are two meters high, witnesses, and were set up in streets near the illegal Israeli settlement of Armon Hanatziv, also known as East Talpiot.

Residents of Jabal al-Mukabbir said that four days earlier, on Wednesday, Israeli forces closed all routes to the neighborhood with cement blocks and set up a checkpoint at the main entrance.

Late on Tuesday, Israel’s security cabinet announced that Israeli police would be entitled to ‘impose a closure on, or to surround, centers of friction and incitement in Jerusalem, in accordance with security considerations.’

The cabinet also gave approval for the revocation of residency status for Palestinians who carry out attacks as well as the police closure of occupied East Jerusalem.

Israeli rights group B’Tselem has called the Israeli government’s response to recent escalation in the area as ‘the very inverse of what ought to be done’ toward ending the violence.

‘The events of recent weeks cannot be viewed in a vacuum, isolated from the reality of the ongoing, daily oppression of 4 million people, with no hope of change in sight,’ the group said in a statement on Tuesday.

At least seven Israelis and 42 Palestinians have been killed in violence that has escalated since the beginning of October.

Israeli settlers renewed their attacks on the eastern Hebron area on Sunday evening, hours after they carried out a similar attack, according to local sources.

More than 200 Israeli settlers attacked the Palestinian villages of Wad al-Haseen and Wad al-Nasara near the illegal Israeli settlement of Kiryat Arba, overnight, in the eastern Hebron district of the occupied southern West Bank, locals and medics said.

During the attack, Israeli settlers threw stones and firebombs at Palestinian homes and injured at least three people, two of which were minors, while Israeli forces later shot and injured one Palestinian with live fire.

An Israeli army spokesperson said she did not have reports of any injuries with live fire.

The spokesperson said clashes between Palestinians and Israelis broke out in the area, after which Israeli forces ‘arrived at the scene anddispersedthe clashes using riot dispersal means.’

Kayed Daana, one of the residents whose home was attacked told Ma’an that dozens of Israeli settlers attacked her neighborhood and injured at least three of her neighbors who have been identified as 40-year-old Imad and two minors, Abdullah, 13, and Muhammad, 17.

Muhammad’s injuries were the most serious of the three, as he was hit in the chest with one of the fire bombs, medics said.

Daana told Ma’an News Agency that she would like to urge the International Red Cross and others in the international community intervene against Israeli violations and attacks on Palestinians.

Bassam al-Jabri, one of the residents, said he saw the attacking Israeli settlers cutting the blockade fence that separates the illegal Israeli settlement of Kiryat Arab from nearby Palestinian homes, while under the protection of the Israeli troops before they attacked his neighborhood with fire bombs.

Al-Jabri said his house was one of those set ablaze, but that he and his neighbors were able to put the fire out before the fire was able to damage his whole home.

Community member Farid al-Razim, told Ma’an that villagers in his area were attacked by Israeli settlers with firebombs, while Israeli forces were shooting tear gas, and that one of the Palestinians from a neighboring village who had come to help was shot and injured with live fire.

While relations between Palestinian residents and Israeli settlers in the occupied West Bank are normally tense, thesituation has been significantly deteriorating since settlers’ caught fire a home belonging to the Duwabsha family in Nablus on July 31.

An 18-month-old toddler was burned alive during the attack, while his mother and father succumbed to their burn wounds while being treated at separate hospitals. The family’s four-year-old son is the only remaining survivor of the attack.

On Oct. 1, suspected Palestinians shot and killed Eitam and Naama Henkin, two settlers who were driving between the illegal settlements of Itamar and Elon More in an area near Huwwara in Nablus.
Their four children, aged between four months and nine years, were found unharmed in the back of the car.

It is speculated that the shootings were a revenge attack on Israeli settlers, following months of increased restrictions at the Al-Aqsa Mosque compound and calls from right-wing Jewish groups, urging their supporters to visit the compound, which is venerated by Jews as the Temple Mount.
Following the shooting, hundreds of Israeli settlers rioted across the occupied West Bank, with multiple attacks reported on Palestinian homes and vehicles.

The Palestinian government has no jurisdiction over Israelis in the West Bank, and violent acts carried out by Israeli settlers often occur in the presence of Israeli military forces who rarely act to protect Palestinian residents.

Palestinians are therefore left to fend for themselves as few options for their personal security remain.

While Israeli forces will detain a Palestinian in the occupied West Bank for possessing a knife or gun, Israelis living in the same area are legally able to carry such weapons.

Rights groups have criticized Israel for implementing different legal systems for Palestinians and Israeli settlers living in the same area.

Such practices, they say, protect the expansion of settlements while systematically removing the ability for Palestinians to move freely throughout the occupied territory.

Clashes have been witnessed across the West Bank, including Jerusalem, and Gaza, as well as in Arab communities inside the occupied 1948 land, against the backdrop of Israel’s repeated assaults against al-Aqsa mosque compound in Jerusalem.

Israel has been enforcing a temporal division on the compound, the third holiest place in Islam, which ignited strong feelings of anger among Palestinians.