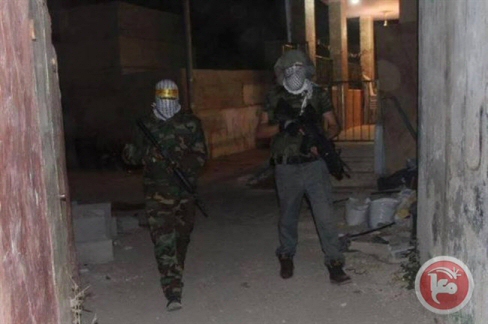 During the raid, Israeli forces issued an evacuation notice to the family of Tariq Dweik, which informed the family that their house would be sealed with cement and barred from entry within 48 hours.

Israeli forces also raided the home of Thaer abu Ghazalah, but the troops retreated after Palestinians in the area opened fire on the invading Israeli forces, according to Ma’an.

Israeli forces also detained Ahmad al-Saqa and Ahmad Ibrahim after raiding their homes. The two were reportedly taken to an unknown location.

Israeli forces reportedly retreated during the raid after the Al-Aqsa Martyrs Bridges, the armed wing of the Fateh movement, opened fire at the troops.

Separately, Israeli forces also raided the villages of Kaffr Aqab and Samiramis, near Jerusalem, where they ransacked the houses of families who’s relatives allegedly carried out stabbing attacks in Jerusalem, and issued demolition notices.

In Bethlehem Israeli forces hit a 15-year-old Palestinian in the head with a tear gas grenade in Dar Salah village in east Bethlehem during clashes in the area.

Medical sources said that the teen sustained a moderate injury and was transferred to a hospital for treatment.

The teen sustained the injury after the students of Dar Salah school participated in a march protesting the Israeli violation against the Palestinians and al-Aqsa mosque.

‘Excessive use of force’

The UN Office for the Coordination of Humanitarian Affairs reported that the second week of October saw the highest number of Palestinian deaths and injuries in the West Bank and Israel recorded in a single week since 2005.

The UN High Commissioner for Human Rights said last week that ‘the high number of casualties, in particular those resulting from the use of live ammunition by Israeli security forces, raises concerns of excessive use of force, and violations of the right to life and security of the person.’

While the Israeli leadership attributes the escalation in violence to Palestinian incitement, most Palestinians have pointed to the decades-long Israeli military occupation as the root cause of recent events.

United States Secretary of State John Kerry reportedly told Israeli Prime Minister Benjamin Netanyahu earlier this week that the Israelis ‘have a right to protect themselves against violence towards civilians, in Jerusalem’s Old City and anywhere else.’

US president Barack Obama on Friday evening also voiced support for Israel’s recent actions, saying that it had a right to ‘protect its citizens.’

The Palestinian envoy to the UN last week requested that the UN deploy special security forces to occupied East Jerusalem to help quell violence, but Israel’s ambassador to the UN Danny Danon said on Friday that Israel objects to international oversight in the area.

Israeli troops also detained the brother of Amjad al-Jundi, a Palestinian who Israeli authorities claim was shot and killed after allegedly stabbing an Israeli soldier and stealing his gun in southern Israel on Oct. 7.

Al-Jundi’s brother, Mahmoud Hatem Ibrahim al-Jundi, 24, was detained near Tarqumiya, northwest of Hebron, while he was on his way to work in Israel, locals said.

The other three Palestinians have yet to be identified, although an Israeli army spokesperson confirmed that eight Palestinians were detained in Hebron overnight Sunday for ‘illegal activity.’

October has seen record numbers of detentions since June 2014, according to the UN Office for the Coordination of Humanitarian Affairs, as Israeli authorities respond to increasing attacks and clashes in the region, through methods that critics argue amount to collective punishment.

Since the beginning of the month, at least 42 Palestinians have been shot dead, around half of whom were killed during clashes, and more than 1,500 have been injured.

Meanwhile, Palestinians have been responsible for the deaths of seven Israelis killed in the same period, with dozens more injured in various attacks.

An Israeli police statement released Thursday reported that more than 200 Palestinians have been detained during the last two weeks on charges including stone throwing, throwing Molotov cocktails, and carrying a knife.

The Palestinian Authority Committee for Prisoners’ Affairs meanwhile said last week that Israeli forces have detained up to 650 Palestinians since the beginning of October, most of them younger than 20 years old.

The committee said in a statement that most of the Palestinians were detained during clashes with Israeli soldiers, or subsequently in overnight raids on the pretext of resisting Israeli soldiers.

According to the statement, many Palestinians had reported being held for hours at interrogation centers, undergoing humiliation and maltreatment. Some prisoners said that they were violently beaten during their detention.