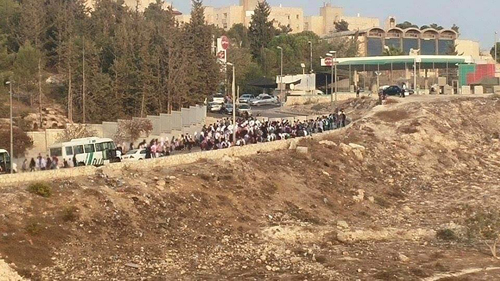 An elderly Palestinian woman from the al-’Isawiyya town, in occupied Jerusalem, died late on Sunday at night, on a military roadblock, after Israeli soldiers, manning a roadblock on the eastern entrance of the town, delayed a car moving her to a hospital.Member the Follow-up Committee in al-‘Isawiyya, Mohammad Abu al-Hummus, said the elderly woman, Hoda Mohammad Darwish, 65 years of age, suffered a respiratory issue due to tear gas inhalation, before her family took her in their car, in an attempt to reach a hospital.

He added that the family reached the Israeli military roadblock, east of the town, where dozens of cars were lined up.

The driver tried to bypass the cars, but the soldiers fired several live rounds in the air, and forced him to stop.

Abu al-Hummus added that the family pleaded with the soldiers, who saw the elderly woman fading away due to severe effects of tear gas inhalation, but they kept delaying until the woman was near death.

The family eventually managed to reach a local hospital, but the woman was declared dead minutes later due to severe respiratory complications.

Al-‘Isawiyya has been completely isolated since last Wednesday, after Israeli soldiers placed concrete blocks on its main roads, and installed a roadblock on its eastern entrance, forcing the residents to go through extensive searches and extended delays every time they wanted to enter or leave their town.

Approximately 19.000 Palestinians live in al-‘Isawiyya, and are currently completely isolated and surrounded by roadblocks and illegal colonies.