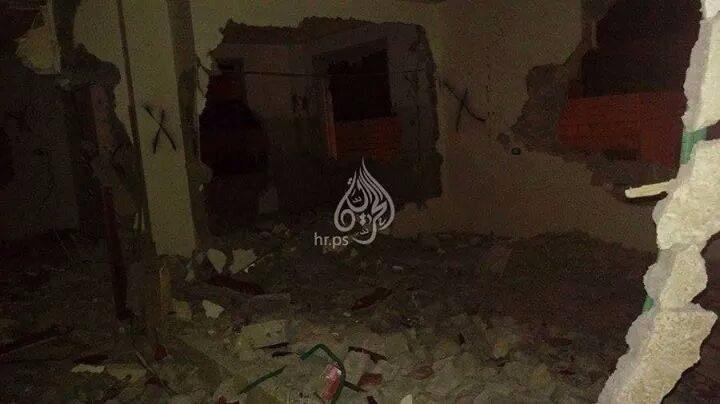 In the latest punitive home demolition carried out by Israeli troops since they resumed the practice this year, the military on Monday night destroyed the interior of an apartment located on the third floor of a multi-story apartment building near Hebron.The apartment belongs to the family of Maher Hashlamoun, who was convicted last year of killing an Israeli settler and sentenced to two concurrent life terms in Israeli prison.

The family’s home was previously invaded by Israeli troops in August of this year. The soldiers said they had an order to demolish the home and would return at any time to carry out the order.

For the past three months, the family has lived in fear each night that the Israeli military, which carries out such demolitions in the dead of night, would arrive at any moment to evict them and destroy their home.

According to the Ma’an News Agency, al-Hashlamoun’s wife told a local radio station, ‘I wanted to tell everybody that they shouldn’t feel angry, because we are happy with this, as we had given over this house to God.’ She then asked listeners to pray for her husband’s release.

The demolition of the flat, which is located in a multi-story building, is likely to have caused structural damage to the entire building, and the other tenants may end up losing their homes as well.

The apartment was home to al-Hashlamoun’s wife and two children, who have been rendered homeless by the demolition of their flat.

Last November, when al-Hashlamoun carried out his attack against the Israeli settler, he was shot by rounds of live ammunition to different parts of his body, mainly in the chest, abdomen and his left arm. He continues to suffer from various complications from those injuries, especially in his lungs and liver; one of the bullets was not removed due to its proximity to his heart.

B’Tselem, an Israeli human rights group, estimated that from 2006 until 30 June 2015, Israel demolished at least 876 Palestinian residential units in the West Bank (not including East Jerusalem), causing 4,105 people – including at least 2,011 minors – to lose their homes.

B’Tselem maintains that punitive house demolitions flagrantly breach international law, which allows destruction of property only when necessary for a military operation.

The group states, “House demolitions are a clear case of collective punishment in that the primary victims are relatives of the persons suspected of committing an offense.’