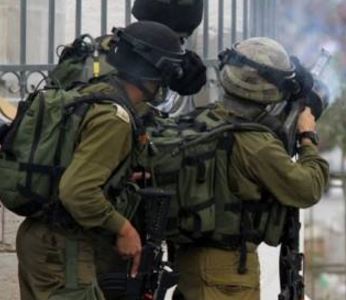 The Palestinian suffered a fracture in his leg, in addition to cuts and bruises to various parts of his body.

In addition, soldiers invaded the ‘Aida refugee camp, north of Bethlehem, and kidnapped a young Palestinian man, identified as Akram Khdeir Abu Khdeir, 21, after storming his family home and searching it.

Furthermore, Israeli sources said a soldier was slightly injured, near the Gush Etzion settlement block, south of Bethlehem, allegedly after a Palestinian stabbed him.

The army shot and wounded the Palestinian in the legs, and arrested him.

On Friday morning, soldiers shot and injured a Palestinian teen while walking towards his family’s olive orchard, northwest of the southern West Bank city of Hebron, and kidnapped him despite his injury.

On Thursday, Israeli soldiers shot and injured ten Palestinians Hebron and Tulkarem, while Israeli settlers attempted to kidnap a child in Hebron.