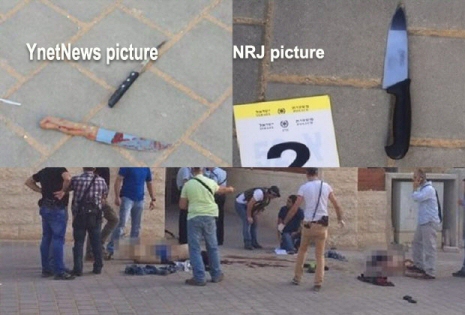 According to Israeli army spokespersons, Israeli police were called to the area by an Israeli citizen who allegedly watched them trying to stab fellow Israelis. The police immediately arrived in the area and opened fire on the Palestinians.

Medical sources said that one of the Palestinians was killed and later identified as Mahmoud Ghneimat from the West Bank city of Al-Khalil. The other was critically wounded, and was identified as Miqdad al-Heeh.

The increasing number of Israeli killings of Palestinians has pushed many of the media monitors and analysts to examine each case of the killings, according to Days of Palestine.

Regarding this incident, and throughout the coverage of the Israeli media, it became clear that the Palestinians did not plan to stab settlers or even have knives.

Israeli news site Ynet reported the incident with pictures of two knives, one of then stained with blood and bearing three screws in the handle. It reiterated that the pictures were of the knives used in this exact incident.

However, another Israeli news website called NRG reported the incident with pictures including only one knife without blood, and it has no screws in the handle. The website also stressed that the pictures were from the scene of this exact incident.

Meanwhile, Israeli media and police have also reported contradicting narratives about the incident, one being that the two Palestinians went into an Israeli bus and started stabbing travelers, but one of the Israelis stopped them and called the police, who immediately arrived and shot them.

Another narrative said that they wanted to travel by bus, but were denied passage. So, they went to look for Israelis to kill them.

A third narrative said that when they wanted to take the bus, the Israelis recognized that they were Arabs and shouted “terrorists, terrorists,” and the two Palestinians fled. Then, the police saw and shot them.

Regardless of all of these complications, a video for the two Palestinians showed them lying on the ground bleeding, while police prevented any medical assistance for them; however, they were unable to move and apparently did not pose any threat.

This proves that they were intentionally executed and the Israeli police was to blame for their killing.