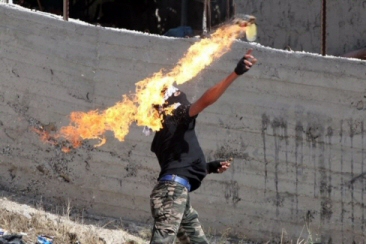 Three Israeli settlers were injured after a Molotov cocktail was thrown at their vehicle near the illegal settlement of Beit El, in the occupied West Bank, according to Israeli army and media.The army said that the firebomb injured a mother and her two children while they were driving down Route 60. A four-year-old sustained burns across her body and was left in moderate condition, while the other two were left with light injuries, Israeli daily Haaretz reported.

The injured were taken to Hadassah Ein Kerem Medical Center, in Jerusalem. No immediate information was given on the suspects.

Israeli settlers subsequently carried out a spate of reprisal attacks following the fatal shooting, while more than 200 Israeli settlers, on Sunday, attacked the Palestinian villages of Wad al-Haseen and Wad al-Nasara, near the illegal Israeli settlement of Kiryat Arba, near Hebron.

Ma’an News Agency reported that, during the attack, Israeli settlers threw stones and firebombs at Palestinian homes, injuring at least three people, two of whom were minors, while Israeli forces later shot and injured one Palestinian with live fire.

Over 50 Palestinians have been killed by Israeli forces since the beginning of the month, and at least nine Israelis have died in attacks by Palestinians.