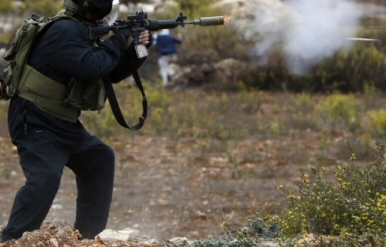 16-year-old Ahmad Mohammad Said Kamil was gunned down and killed by an Israeli security guard, Saturday, for allegedly “running towards” the soldier.The boy was killed at the Jalama checkpoint, to the north of Jenin. Nobody else was hurt.

Palestinian rescue services said medics were prevented from reaching the boy. They estimated he had been shot at least five times.

The Israeli Defence Ministry, which controls the crossing, claimed the boy had run towards a guard holding a knife.

The checkpoint, a main point of transit, is currently closed to traffic.

The boy was carrying a box of sweets, according to local sources.

Kamil, reportedly from Kabatiyeh, in the northern occupied West Bank, was gunned down as he approached the Jalama checkpoint, at one of the heavily guarded entrances to Jenin, also in the north of the region.

Israeli forces claimed that the Palestinian teenager was carrying a box of sweets and moving between cars waiting at the checkpoint leading into Israel, where soldiers were checking identification cards.

Witnesses said he was selling the popular winter treats, known as Krembos, to waiting drivers.

One confirmed the Israeli version of events saying he saw the boy running towards the guards with a knife.

Another said the boy was working as a sweet seller on the Palestinian side of the checkpoint when he was killed.

Krembos are thin biscuits topped with marshmallow and chocolate, are similar to Tunnocks teacakes. They are traditionally only eaten between October and February.

The shooting is the latest in a wave of deadly shootings of Palestinians by Israeli forces, who have been condemned by human rights organisations and internationally for excessive and unnecessary use of force.

The death toll has skyrocketed since the start of October, with over 50 Palestinians now killed by the Israeli military, including ten children, and thousands more injured.

Ten Israelis have also been killed in “lone wolf” attacks, according to PNN.