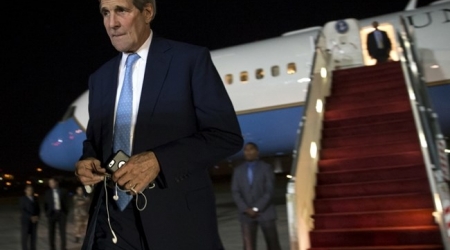 U.S. Secretary of State John Kerry is in Jordan, renewing his push to ease violence and tension between Israelis and Palestinians.Kerry meets Saturday, in Amman, with Palestinian President Mahmoud Abbas and Jordan’s King Abdullah II.

According to Al Ray Palestinian Media Agency, they are exploring ideas first raised during a Thursday meeting in Berlin, between Kerry and Israeli Prime Minister Benjamin Netanyahu, which aimed to defuse the situation.

Israeli sources said to Israeli radio that Netanyahu said to Kerry that both Abbas and King Abdullah had to publicly declare that no changes took place on Al-Aqsa mosque.

PNN reports, however, that Netanyahu has agreed to install video cameras at the Al-Aqsa Mosque compound, according to John Kerry.

Mr. Kerry said that Netanyahu will also announce more steps Israel intends to take in order to demonstrate that it is committed to maintaining the status quo.

He said that all of these steps have been accepted by the Jordanian government.

Mr. Kerry added that Netanyahu had told him Israel would continue to allow freedom of worship on the Temple Mount and would not deviate from the status quo.

In July, dozens of worshippers were injured after Israeli extremist settlers stormed the mosque compound, known as the ‘Temple Mount’ to Jews.

It is thought the agreement is a compromise in Israel’s favor, after Netanyahu resisted calls for United Nations peacekeepers to be stationed at the site.

Last week, he spoke out against pressure from France for an international presence at the site of the Al-Aqsa Mosque and the Western Wall, in Jerusalem’s Old City.

He has now left on a further diplomatic trip to Saudi Arabia.

UN Secretary-General, Ban Ki-moon, called on both Netanyahu and Abbas to take careful steps toward de-escalation.

Meanwhile, Israeli channel 10 reported that the coming week is a decisive and crucial to understand the course of Jerusalem uprising.

Military correspondent Orr Heller reported to the channel that if the political efforts do not make any progress, the Israeli army will deploy the reservists soldiers to quell the confrontations.

Since the beginning of confrontations, early in October, around 55 Palestinians were shot dead, 12 of them are children, as well as thousands of injuries documented according to Palestinian ministry of Health. 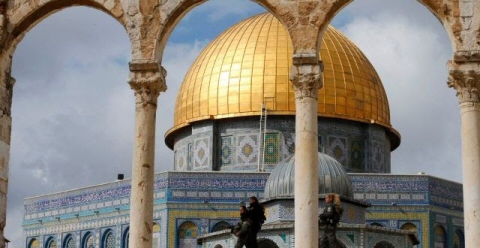