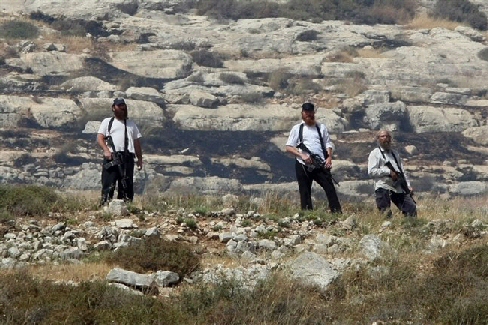 The home belonged to Istabraq Ahmad Noor, 15, who was shot on Wednesday after Israeli forces claimed she was planning to sneak into the Yitzhar settlement to stab residents inside.

Daghlas said that a stand-off between Madama locals and Israeli settlers lasted nearly an hour, where they threw rocks at each other until the group of settlers retreated.

Israeli forces closed the checkpoint for over an hour to prevent their entrance, he added.

The Yizhar settlement where Noor was shot Wednesday has gained notoriety among both Israelis and Palestinians as a bastion of extremists and its Israeli residents regularly carry out attacks on Palestinians and their property.

A former senior officer in the Israeli army, Maj. Gen. Nitzan Alon, said Thursday in a court hearing that settler violence fuels attacks by Palestinians, according to Israeli daily Haaretz.

“Some of the motivation of the Palestinians to carry out terror attacks is due to the violence of right-wing elements in the West Bank,” Haaretz quoted the officer as saying.

As revenge attacks continue, some Palestinian communities in the occupied territory have formed voluntary groups to guard communities against settler attacks.

Last week Riyad Mansour, the permanent observer for Palestine to the UN, asked the UN Security Council to intervene in order to stop aggression by settlers, including the implementation of a measure to disarm settlers.