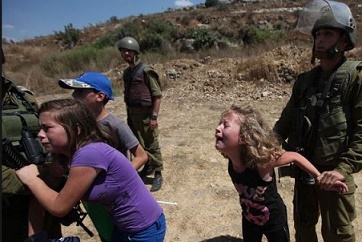 Detainee Abdul-Fattah Doula, representative of child detainees in Ofer Israeli Prison, told a lawyer of the Palestinian Detainees’ Committee Israel is holding captive 100 children in Ofer Prison, and that all of them were kidnapped this month.Doula added that this number was a %400 increase in the number of child detainees, adding that 40 of the detained 100 children in Ofer are below the age of 16, including 13 years of age child.

He also said that 22 children were beaten and tortured, including assaults against them during the course of their arrest; many were attacked by army bogs, and others were tortured with electric shocks, in addition to being subject to ongoing verbal abuse.

The Detainees’ Committee said torture marks could be seen on the bodies of many child detainees.

About 60% of the children were taken prisoner after the soldiers invaded their homes, and five of them were shot and injured prior to their arrest.

The Committee also said the army has kidnapped nearly 1000 detainees since the begging of this month, half of them were children, and that most of them are from occupied Jerusalem.