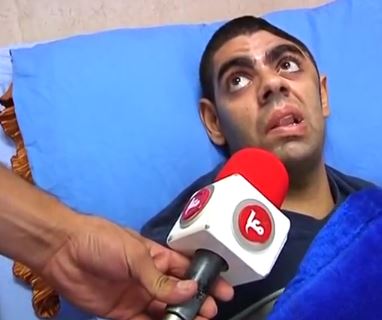 The Sept. 7 video of undercover Israeli forces posing as Palestinians, then turning and shooting Mohammad Othman Ziyada with many live rounds went viral across the internet, social websites and news agencies. Now, a month and a half later, the 21-year old Palestinian remains in the Palestine Medical Center in Ramallah, still suffering tremendous effects from his head injury.Doctors say the effects of the head injury will last his entire life, even after extensive medical treatment and rehabilitation.

Ziayada, 21 years of age, from Beitello village near the central West Bank city of Ramallah, says that he will never forget that fatal date, September 7, when he was assaulted by undercover Israeli soldiers, who first shot him, then severely beat him in the head, and throughout his body.

“After they placed me in their army jeep, they continued beating me up, despite my injuries, they also beat me up with their pistols. Eventually, they took me to an Israeli hospital, but even there, the soldiers continued to beat me.”

He added that the soldiers interrogated him after he underwent a dangerous surgery, and assaulted him again while interrogating him, and beat him on his wounds, causing the wounds to reopen and bleed extensively.

“They started asking me about what I was doing there, who I was with, what was I doing…,” Ziyada said, “I told him I can’t remember anything, and that all I know is that I was walking there on my own, and that is when they started beating me again.”

During the time of the assault, undercover forces had infiltrated the Palestinian protest in the village, and they themselves were pretending to be protesters, even throwing stones at Israeli army vehicles along with Palestinian youth.

The soldiers shot Mohammad and two others, from close range, and kidnapped him despite his very serious injury, he was only freed when it became apparent he is now a disabled man.

“When he was moved to hospital he had no pulse, no heartbeat, the doctor told us.” His mother said, “He was as close to death as anybody can be, but thank God, now his wounds are healed. But he still cannot move his hand or leg, he needs extended rehabilitation.”

His father also said the only thing that concerns him now is his son’s health, and that he is calling on various institutions, medical facilities and human rights group to intervene, and provide him with the specialized and urgently need medical treatment.

— This report was published by the Maan News Agency, and was translated by Saed Bannoura – IMEMC News