Army Kidnaps Thirteen Palestinians In The West Bank; Many Injured 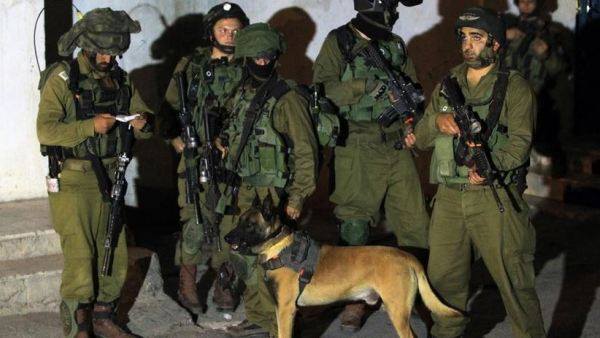 Israeli soldiers have kidnapped, on Monday at dawn, at least thirteen Palestinians from their homes, in occupied East Jerusalem, Nablus, Jenin and Hebron, while many students and residents have been injured in Hebron. Paramilitary settlers attack homes and stores in Nablus, assault olive pickers.The soldiers stormed and searched several homes in Jerusalem’s Old City, and Silwan town, south of the Al-Aqsa Mosque, and kidnapped five Palestinians.

Two of them, identified as Mo’taz Jaber, and his brother Fathi Jaber; were kidnapped from their family home in the Sa’diyya neighborhood, near the Al-Aqsa Mosque.

In addition, soldiers invaded the ath-Thoury neighborhood, in Silwan town, searched and ransacked homes, and kidnapped Sahdi Ghrab, 17, and Tamer al-Qawasmi, 18, in addition to kidnapping another Palestinian, identified as Nader Marwan Nasser, 20, in Ras al-‘Amoud neighborhood in Silwan.

In related news, dozens of paramilitary Israeli colonizers attacked homes and stones in Huwwara town, south of Nablus, and hurled stones on homes and shops while chanting and shouting “Death To Arabs,” Israeli soldiers were present, but did not attempt to remove the assailants.

Media spokesperson of the Popular Committee against the Wall and Settlements in Beit Ummar town, north of Hebron, Mohammad Ayyad Awad, said the soldiers invaded ‘Aseeda area, in the town, and kidnapped Mirshed Mohammad Za’aqeeq, 40, after smashing the front door of his home.

Za’aqeeq is a former political prisoner, and a married father of five children; the soldiers took him and the other kidnapped Palestinians to the Gush Etzion military and security base.

Soldiers also invaded various neighborhoods in Hebron city, and installed roadblocks on the main entrances of Sa’ir and Halhoul towns, in addition to Hebron’s northern entrances, before stopping and searching dozens of cars and investigating the ID cards of the passengers.

Also in Hebron, a young Palestinian was shot with several live Israeli rounds near Beit Einoun junction, northeast of Hebron, and the soldiers prevented Red Crescent medics from reaching him.

At least twenty schoolchildren suffered the effects of tear gas inhalation, during clashes that erupted with Israeli soldiers near the Ibrahimi Mosque, in Hebron.

The clashes took place close to the Abu ar-Reesh roadblock, on the southern entrance of Hebron’s Old City, and the Ibrahimi Mosque.

The wounded students, including many who fainted, have been transferred to a local hospital for treatment.
Furthermore, soldiers invaded the northern West Bank city of Jenin, and kidnapped Mo’taz Sami Salfiti, 27, from his home.

Two Palestinians were also kidnapped in Atteel and Saida towns, north of the northern West Bank city of Tulkarem. The kidnapped have been identified as former political prisoner Ala Faisal Atteeli, 23, and Aladdin Mohammad Hamdan, 24.