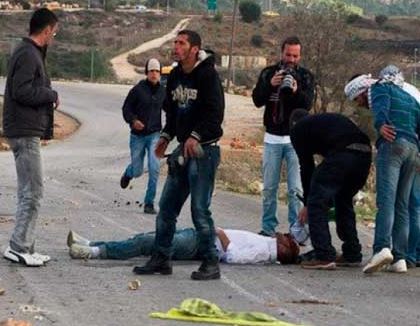 Palestinian medical sources have reported, on Sunday evening, that one resident was injured after an Israeli colonialist settler stabbed him, near Kafl Hares village, north of the central West Bank city of Salfit.The sources said the young man suffered a mild injury in his arm, and received the needed medical treatment.

Local sources said dozens of settlers gathered near the main junction of their village, in addition to the junction leading to Kafr ad-Deek village, west of Salfit.

In related news, dozens of paramilitary settlers gathered, on Sunday at night, in the Shuhada Street, in the center of the southern West Bank city of Hebron.

Israeli sources reported gunshots were fired at a military watchtower in Beit Romano illegal colonialist outpost, and the illegal outpost in Osama Bin al-Monqeth School, that was illegally occupied by the colonizers in the Old City.

There has been no official confirmation of an exchange of fire, but the area continues to be closed.

Israeli soldiers also closed all roadblocks in the area, while additional units were deployed and initiated a search campaign for the shooters.