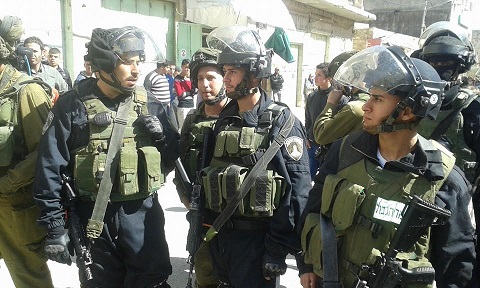 Dozens of Israeli military vehicles invaded, on Tuesday at dawn, various Palestinian communities in different parts of the southern West Bank district of Hebron, and kidnapped nine Palestinians, including two children.The soldiers stormed and ransacked several homes, and a store, in Hebron city, interrogated many Palestinians, and kidnapped five Palestinians.

Media spokesperson of the Popular Committee against the Wall and Settlements in Beit Ummar, north of Hebron, Mohammad Ayyad Awad, said the soldiers invaded the ath-Thaher and Bahar neighborhoods in the town, violently searched homes, and kidnapped four Palestinians.

Several Palestinians suffered the effects of tear gas inhalation, after the soldiers fired gas bombs during their withdrawal from the town.

It is worth mentioning that the soldiers have kidnapped 49 Palestinians in Beit Ummar since the beginning of this month, while at least 22 of them are children.

The army also installed roadblocks on the entrances of Sa’ir and Halhoul town, in addition to Hebron’s northern entrance, before stopping and searching dozens of cars while investigating the ID cards of the passengers.

On Tuesday at dawn and late on Monday at night, soldiers invaded several communities in the northern West Bank districts of Jenin and Nablus, and kidnapped five Palestinians, while many were injured in Jenin.