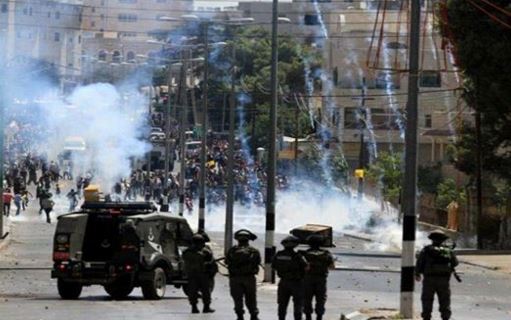 The Palestinian Health Ministry has reported Friday that at least twenty-five Palestinian have been injured during clashes with Israeli soldiers in al-Biereh town in the central West Bank, in Beit Ummar town, north of the southern West Bank city of Hebron, and in Bethlehem city. Soldiers also kidnapped two Palestinians.The Ministry said 14 Palestinian were shot and injured in the al-Baloa’ area, in al-Biereh; nine with live army fire to different parts of their bodies, and one was shot with a rubber-coated steel bullet in the ear.

The Ministry also stated that four Palestinians were shot with live rounds, and four others with rubber-coated steel bullets in the southern West Bank district of Hebron.

In addition, one Palestinian was shot with a live round, and one was kidnapped, during clashes with soldiers invading Beit Ummar town, north of Hebron.

The clashes took place on the northern entrance of Beit Ummar and the ‘Aseeda area, while the soldiers fired live rounds, rubber-coated steel bullets and gas bombs on the protesters.

Coordinator of the Popular Committee against the Wall and Settlements in Beit Ummar Mohammad Awad, said a man, 40 years of age, was shot with a live round in the leg, and was moved to a local hospital.

Awad added that the soldiers also kidnapped Samer Mahmoud al-‘Allami, 21, and took him to an unknown destination.

In addition, two Palestinians were shot with rubber-coated steel bullets in their heads, suffering moderate wounds, during clashes with soldiers near at the northern entrance of the West Bank city of Bethlehem.

The Red Crescent in Bethlehem said its medics provided medical attention to the two wounded Palestinians, before moving them to the Beit Jala Governmental Hospital.

It added that ten Palestinians suffered the effects of tear gas inhalation, and received treatment by local medics.

Also Friday, Israeli soldiers shot and killed a young Palestinian man, and seriously wounded another, near the Za’tara roadblock, south of the northern West Bank city of Nablus.