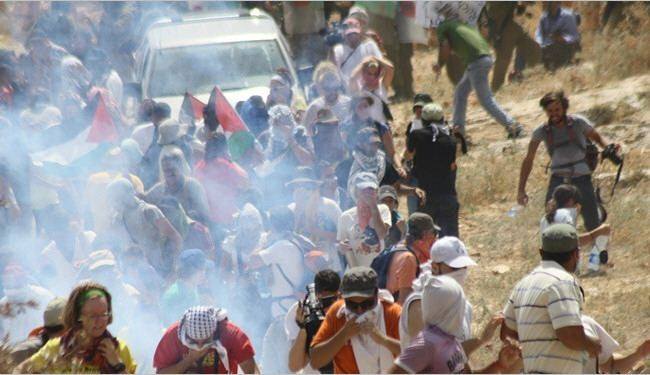 Two Palestinians were shot with the sponge-tipped rounds, one in the chest and the other in the thigh, while scores suffered the effects of tear gas inhalation.

The protesters marched from the center of the village, carrying Palestinian flags, and posters denouncing the escalating Israeli violations against the Palestinian people, in different parts of occupied Palestine, especially in Hebron and Jerusalem.

Also on Friday, 25 Palestinians have been injured in al-Biereh, Hebron and Bethlehem, during clashes with invading soldiers.

The soldiers also shot and killed a young Palestinian man, and seriously wounded another, near the Za’tara roadblock, south of the northern West Bank city of Nablus.

In addition, the soldiers rammed with their military jeep a young Palestinian after deliberately targeting him, and assaulted several medics and journalists, on the northern entrance of the central West Bank city of al-Biereh.