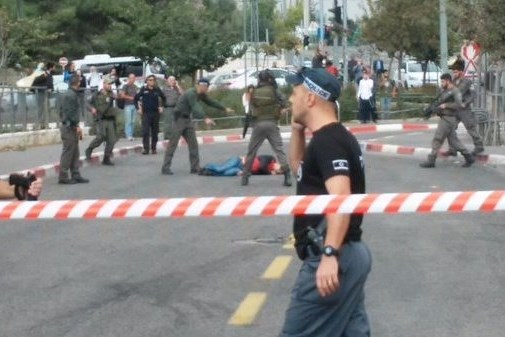 A Palestinian from east Jerusalem was shot dead on Friday evening near the Jerusalem light rail station by three separate shooters after he allegedly pulled out a knife and very lightly wounded a soldier. The Palestinian was shot numerous times – by light rail security, a border policeman, and an armed paramilitary settler. Their numerous gunshots also wounded a bystander.The Palestinian who was killed was identified as Ahmad Hamada Qneibi, 23, from Kafr Aqab in East Jerusalem. The 23-year old Palestinian man suffered multiple gunshot wounds and was critically wounded. He was left bleeding on the ground for an extended period of time without receiving medical treatment, and died soon after he was transferred to an ambulance.

Israeli medics from the Magen David Adom medical service, which is affiliated with the International Committee of the Red Cross, told reporters from the Israeli Ha’aretz newspaper that when they arrived on the scene soon after the incident, they immediately treated the Israeli soldier, aged 22. The soldier was very lightly wounded with a shallow stab wound in the upper body. The medics told the paper, ‘We gave him a initial medical aid on the scene and then evacuated him to a hospital quickly.’

The other person wounded in the incident was a bystander who was hit in the leg by one of the multiple gunshots fired from three separate shooters toward the Palestinian man.

The location of the incident was outside the light rail station on Bar-Lev Street in Jerusalem.

There have been more than seventy Palestinians killed by Israeli soldiers and settlers since October 1st. The majority of those killed were unarmed, and the number includes two babies under age two.

Of the Palestinians killed this month who were armed, only one was armed with more than a small knife or stone. The one Palestinian who was armed with a gun when he was killed had grabbed that gun from an Israeli on a bus in an October 13th attack.

Despite Israeli claims of a widespread wave of ‘knife attacks’ by Palestinians against Israelis, many of the alleged knife attacks were later disproved by video evidence and eyewitness accounts. There have also been several proven incidents of Israeli soldiers planting knives on the bodies of Palestinians they had killed.