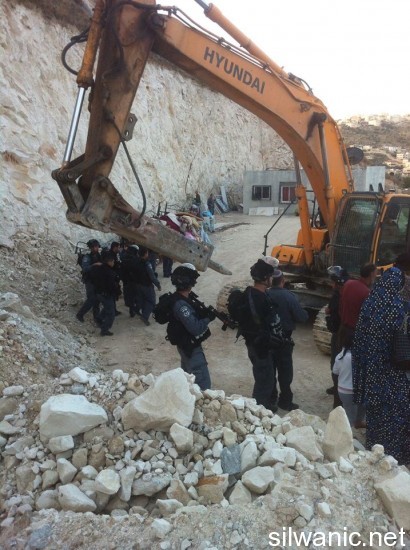 Israeli soldiers invaded, on Monday morning, Jabal al-Mokabber town, in occupied Jerusalem, and demolished a Palestinian home inhabited by seven family members.The Wadi Hilweh Information Center in Silwan (Silwanic) said dozens of soldiers, and employees of the Jerusalem City Council, invaded the town, before forcing the family out of their home, and demolished it.

Resident Sami Edrees told Silwanic that the soldiers only allowed him to remove important documents from his property, light furniture and belongings, before city council workers started removing the fortunate prior to demolishing his property.

Edrees added that the soldiers held the family a few meters away from the property before demolishing it.

The demolished 80 square/meter home was inhabited by Edrees, his wife and their five children; the oldest is 20, and the youngest is only four.

Edrees started building his home three months ago, and moved into the property with his family 15 days ago.

Construction and furnishing coasts were about 100.000 New Israeli Shekels.

Israel said the property was built without a construction permit, and issued two demolition orders over the last two months. Edrees had to pay high fines, yet; the City Council insisted on demolishing it.

The family was never informed the soldiers will be coming in the morning to demolish their home.

While Israel continues to approve, build and expand illegal colonies, and while extremists take over Palestinian lands for their illegal outposts, Palestinians in occupied Jerusalem remain largely denied construction permits, or permits to expand their existing property.

The Israeli Committee Against House Demolitions (ICAHD) has reported that Israel demolished 450 Palestinian structures since the beginning of this year, displacing 514 residents, and that the number of homes and structures demolished since 1967 is 48.488.