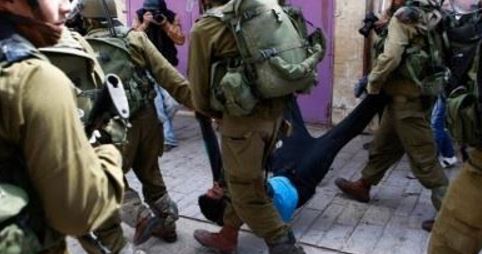 The soldiers also invaded the home of Omar Mosleh Awad, in Khallet al-Ein area, and interrogated him before confiscating his camera as he was filming their invasion.

Awad is the father of Ziad, who was killed by the army on April 10 this year.

It is worth mentioning that the Israeli has kidnapped seven Palestinians, including five children, in Beit Ummar in the last twenty-four hours.

In addition, soldiers kidnapped a young Palestinian woman, identified as Tarteel Tamim al-Tamimi, 18, after assaulting and beating her near the Ibrahimi Mosque, in the center of Hebron city.

Dozens of soldiers also invaded Beit Fajjar town, south of Bethlehem, kidnapped one Palestinian, and summoned three others for interrogation, after searching their homes.

In Nablus, in the northern part of the occupied West Bank, the soldiers kidnapped five Palestinians, confiscated 23.000 NIS from a home belonging to resident Ahmad Othman Ja’ara, and kidnapped him.

In related news, dozens of soldiers invaded Khirbit Hamsa al-Fouqa Bedouin village, in the West Bank’s Plains, and displaced thirteen families of shepherds, so that the army can conduct training.

Aref Daraghma, head of the Wadi al-Maleh and Bedouin Tribes Council said the soldiers informed the families they have to remain out of the area from 6:30 in the morning until midnight.

Daraghma added that the soldiers also told the families they will be back, for further training next Thursday, in addition to November 9 and 12.