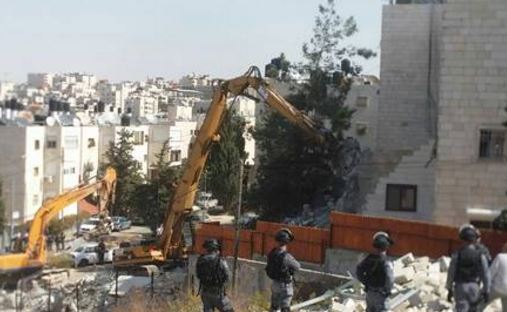 Israeli soldiers demolished, Monday, three Palestinian apartments in Nosseiba neighborhood, in Beit Hanina town, in occupied Jerusalem. One home was demolished earlier.The Palestine TV has reported that the soldiers, accompanied by a number of bulldozers, invaded the neighborhood, approximately at 8:30 in the morning, and demolished three apartments belonging to Mousa Dsouqi, his brother Mahmoud, and lawyer Khaldoun Najm.

Resident Mahdi Dsouqi said the soldiers demolished the three apartments, although the families obtained an order from an Israeli court, halting the demolitions, but the army paid no attention to the order, isolated the entire area, and demolished the properties.

The demolished apartments is 120 square/meters each.

The soldiers also assaulted family members, residents who gathered in the area and even reporters.