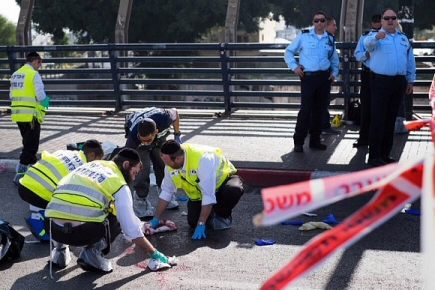 Israeli police, on Monday, shot and wounded a Palestinian man after he allegedly stabbed and seriously injured a 70-year-old Israeli man in the northern Israeli city of Netanya, north of Tel Aviv, Israeli sources said.A spokesperson for Israel’s emergency services, Magen David Adom (MDA), said that the Israeli was in a serious condition and had been taken to Laniado hospital, in Netanya.

He said that MDA had also treated the injured Palestinian but had no immediate information on his condition.

The Palestinian has been identified as Ziyad Ridha, 22, from Balaa village, east of Tulkarem, in the northern occupied West Bank, the head of the village local council told Ma’an News Agency.

Israeli army spokesperson Peter Lerner said that the Palestinian ‘terrorist’ was shot by police in Netanya, while the 70-year-old was ‘severely wounded.’

Just hours before the incident, at least three Israelis were injured in a stabbing attack outside a bus station in Rishon Lezion south of Tel Aviv, including an 80-year-old woman left in serious condition.

Initial reports indicated that the attacker was a Palestinian from the southern West Bank city of Hebron, and had been injured and detained.

An Israeli police spokesperson could not be reached for comment on either incident.