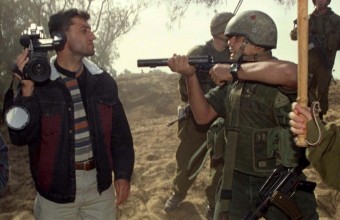 Israeli forces, Wednesday afternoon, physically assaulted a Palestinian cameraman and confiscated his filming equipment near al-Jalama military roadblock, north of Jenin.WAFA Palestinian News & Info Agency said that Mohammad Badarna, who works as a reporter with Palestine TV station, was with his colleague, cameraman Sakhr Zawatiya, about one kilometer away from al-Jalama roadblock getting ready to film a report, when Israeli forces assaulted them.

Badarna and his colleague were working on a report documenting the current situation of agriculture in the northern West Bank district of Jenin, and the conditions of Palestinian workers following the closure of the checkpoint.

Israeli soldiers assaulted Zawatiya using the butts of their riffles, shouted obscenities at him, and detained the crew for over half an hour.

They also seized two video tapes and the camera stand before threatening the crew to beat them up if they approach the checkpoint.

Badarna noted that they have filed a complaint to the Palestinian military liaison and Joint Operations Room.