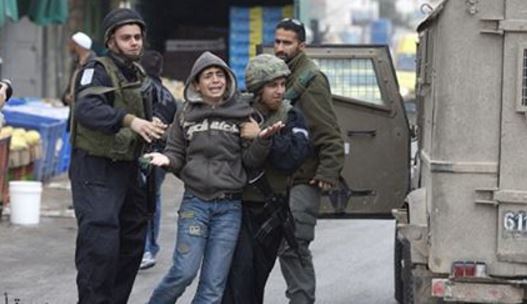 ‘This is a systematic Israeli policy targeting the children, the future of Palestine,’ he said, ‘The large number of abductions, in October, shows a deliberate policy, and a serious level of military escalation.’

‘A large number of abducted children have been assaulted and beaten by the soldiers,’ Qaraqe’ added, ‘They have also been tortured by the Israeli interrogators and jailers.’

The Palestinian official listed some of the torture and abuse methods used by the soldiers and interrogators against the detained children.

1. Beating and assaulting them; kicking punching and striking them with weapons and batons.
2. Unleashing military dogs on the children.

3. Using them as human shields during arrest raids and invasions.
4. Humiliation and threats of violence against them, and their families.
5. Leaving wounded children to bleed for extended periods before moving them to hospitals.
6. Moving many wounded children to interrogation centers prior to providing them with medical care.
7. Forcing them to sign confessions while beating and threatening to harm their families.
8. Placing them in solitary confinement, and denying them the right to see their lawyers and parents.
9. Tying them to their hospital beds, and denying them the right to privacy.

It also said that targeting the children comes under legal support and legislation from the Israeli government, and direct orders allowing the army and military courts to;

1. Use military sharpshooters, and direct orders to use live fire.

3. Imposing high fines on the children and their families.

4. Forcing many under house arrest, or forcing them out of their homes and neighborhoods.
5. Imprisoning many children under arbitrary Administrative Detention orders, without charges.

Qaraqe’ stated that the Israeli policies, especially the recent legislation, have turned the children of Palestine into targets, leading to the death of 17 children since October 1st.

The number of wounded children in the West Bank is 325; 165 were shot with live army fire, 108 with rubber-coated steel bullets, 19 were directly shot with gas bombs, 33 were beaten by the soldiers. In Gaza, 170 children were shot, most of them with live rounds.

He added that detained children are treated as adults, and are sent to military courts, an issue that denies them their very basic rights, guaranteed by Internal Law and the Fourth Geneva Conventions.

The Detainees’ Committee said that, since 1967, when the rest of Palestine fell under occupation, Israel has been implementing different sets of laws in the West Bank and Jerusalem; colonialist Israeli settlers are subject to Civil Laws, while the Palestinians face military laws and courts.

It added that Israel is the only country in the world that sends children to military courts, and that 500 – 700 Palestinian children stand trial in Israeli military courts every year.

In addition, the committee said that the Israeli military has abducted more than 8500 Palestinian children since the year 2000.

Israel also opened a new section for children in the Givon prison in Ramla, where more than 30 children, mainly from Jerusalem and historic Palestine, are confined under difficult conditions.

The army also transferred 138 Palestinian children, who were kidnapped in October, to the Ofer military prison, and subjected 48 of them to torture, in addition to the beatings and abuse they suffered on the hands of the soldiers who abducted them.

Some of the kidnapped children have been shot and injured with live army fire, and many were shot with rubber-coated steel bullets, prior to their abduction.

Seven of the children who were shot with live rounds prior to their arrest have been identified as Jalal Sharawna, Qais Shajaeyya, Marah Bakeer, Anan Mallash, Ahmad Manasra, Tamer Wreidat and Issa Abdul-Mo’ty.

The children face very difficult conditions in prisons, and interrogated centers, including those in Israel’s colonies in occupied Jerusalem and rest of the West Bank, and are denied basic rights, including healthy food, bed covers, and are frequently insulted, abused and humiliated.

The Detainees’ Committee said Israel’s abduction and imprisoning of children, in addition to sending them to military courts, are direct violations of International Law and every treaty related the protection of civilians, especially the children, during conflicts and wars, and those living under occupation. 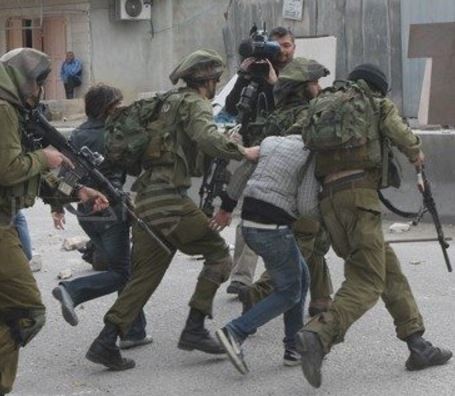