Soldiers Cause Excessive Property Damage To Homes In Silwad 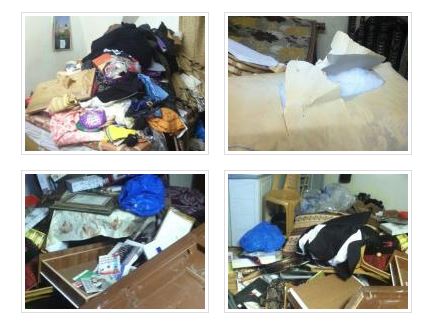 Media sources in Silwad said the soldiers tried to wire and detonate the doors of the homes prior to invading them, but the families opened their doors fast to the army them from installing and setting the explosive off.

Nazeeha Warda, the mother of detainee Firas who received a 13-year prison term, said the army stormed her home approximately at 3:30 at dawn, and ransacked it.

She added that the soldiers opened closets, removed drawers, scattered the clothes and property around the house, and caused excessive damage to its furniture, in addition to removing the bathroom’s tiles, and destroying them.

The soldiers told the family ‘they wear searching for weapons,’ and threatened to return to their home, and demolish it, ‘should the family fail to hand them their gun.’

The family told the soldiers that they never owned weapons, and said the attack is just another method of intimidation and threat of further violence.

On its part, the Kheirallah family said the soldiers also deliberately caused excessive property damage, after storming their home, and held the entire family in one room during the search.

The soldiers also deliberately spilled food, rice, and other consumable materials on the ground, walls and furniture.

In addition, the Fares family said the soldiers ‘were hysterically searching their property,’ deliberately causing damage while searching every corner, and every piece of furniture.

The family kept asking the soldiers about the reason for this invasion, and violent search, but the army refused to give any answer.

The soldiers also closed the roadblock that was installed in Ras al-‘Amoud neighborhood, preventing hundreds of children from reaching their schools, while workers and employees who work out of their town were unable to do so, due to the roadblocks, restrictions and heavy military deployment.

Several school children were also shot with rubber-coated steel bullets, and many suffered the effects of tear gas inhalation.