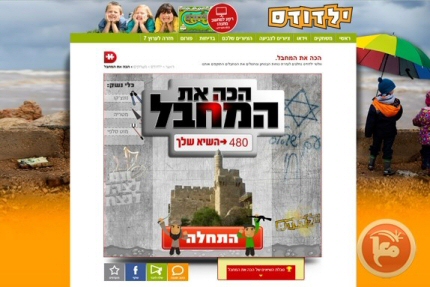 An Israeli news site, on Thursday, removed a game inviting players to help Israeli forces “neutralize terrorists”, shortly after it appeared on the site’s main children’s section, calling the game a “mistake”.News site Arutz Sheva (Channel 7) posted the game, wherein players “assist security forces in neutralizing the terrorists that are attacking us.”

The site pulled the game — entitled “Neutralize the Terrorist” — from the main page after media criticism, according to Israeli news site the Jerusalem Post.

According to Ma’an News Agency, the game offered a choice of three weapons with which to either kill or beat the “terrorist,” who is brandishing guns, Molotov cocktails, and a knife.

The Ibrahimi Mosque in Hebron — a current flashpoint between Palestinian locals and Israeli settlers and military present in the area — was one of several backdrops to the children’s game, which ran phrases ‘Long live Israel’ and ‘Help the IDF win.”

A crude cartoon depiction of a Palestinian-Muslim man wearing a turban appears in front of the holy site brandishing a weapon.

The game was released in light of a series of attempted, alleged, and actual stabbing attacks carried out by Palestinians on Israeli military and civilians.

Israeli forces were criticized last month for their “shoot first, ask later” policy during such attacks, while Israeli MKs received flack for inciting violence against Palestinians.