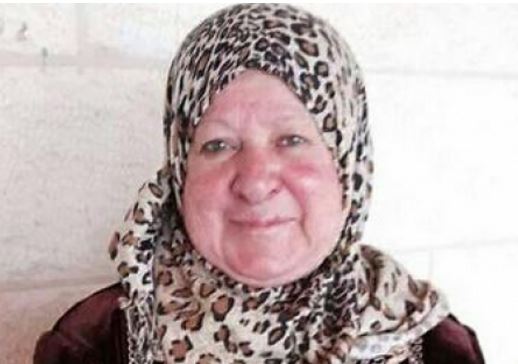 Israeli soldiers shot and killed, on Friday, an elderly Palestinian woman in the southern West Bank city of Hebron, allegedly after she tried to ram soldiers with her car; eyewitnesses denied the claim. The claim was strongly denied by eyewitnesses.The slain Palestinian woman, identified as Tharwat Ibrahim Salman Sha’rawi, was leaving a gas station, before the soldiers fired more than fifteen bullets at her, allegedly “when she attempted to ram them.”

Eyewitnesses said Sha’rawi did not attempt to ram the soldiers, but tried to speed out of the gas station after the army fired dozens of gas bombs, during clashes with Palestinian youths in the area.

It is worth mentioning that the slain woman is the wife of Fuad Sha’rawi, who was shot dead by the Israeli army in 1988.

The army also claimed Sha’rawi ‘carried a knife in her bag’;
the woman never stepped out of her car, and was shot dead behind the wheel. She was on her way to visit her sister.

An Israeli ambulance took the Sha’rawi to a hospital in Jerusalem, but she died upon arrival, according to an Israeli report.

In related news, Israeli sources said two settlers were shot and injured by what the army claimed, “a Palestinian sniper,” near the Ibrahim Mosque, in Hebron. The two are 16 and 18 years of age, and suffered moderate wounds.

After the fatal shooting of the Palestinian woman in Hebron, the Palestinian Health Ministry said 77 Palestinians, including 17 children and three women, have been killed by the army since October 1.